About: "A bigger, bolder version of our Raison D'Etre. This is a bulbous, brown ale brewed with a bunch of malt, brown sugar and raisins." 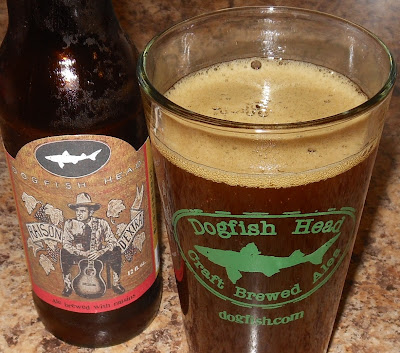 Thoughts: D'Extra poured out an seriously thick and cloudy purple-ish brown color that left my glass in a muddy water type state. The surprisingly light head came to a sliver upon the early pour and then faded just as fast as I could snap a few shots.

First hit on the nose and unholy shit is this stuff strong! Raisins, molasses, brown sugar, caramel, and of course... the BOOZE! I think I caught a buzz of that first whiff. Almost like a cinnamon way in the background but not really... maybe cloves.

Very fucking bready with a fierce hitting mild brown sugary spice. Booze warms immediately, and puts a total haze into the throat. It's overly sweet and incredibly indulgent, yet that brown sugar slowly grips it and pulls it back into a gentler softness that rides out smoothly. In-credible.

This beer is pretty thick feeling and very syrupy. You gotta swallow this beer twice just to get it all down.

It's a good thing these are only sold in one packs, though at the same time, that's also quite irritating. Give it a big bottle for that price at least. It left me craving more. I wonder when DFH is going to brew more of this one. I'm unsure if this 2007 bottle is from the last batch they brewed, but it could quite possibly be as people all over the net have been drinking these lately and the trail ends there.

I'm surprised to see a review for this beer, especially since you just bought it. 2007 was the last time DFH brewed Raison D'Extra, so this is from the last batch. I've seen it pop up a couple of times at my beer store over the past few years. Last time was a couple of years ago I think, and I bought 4 or 5 bottles.

$9 is a great price considering age and demand. I think DFH charges around twice as much at their brew pub, which is insane. I'd pick up more if you're really into it, because it's not easy to come by.

These have been sitting on the shelf at the liquor store down the street from me for a few years now. They've probably got about four more bottles left (and who knows what they've got in the back).

I bought the last two World Wide Stouts on the shelf that were there for a long long time and the next couple of days they had another whole row of bottles on the shelf and in the fridge.

But then again, the same thing happened when I bought the last Theobroma. They've got about eight or nine big bottles of DFH stuff that don't really show any signs of going anywhere soon. There's about five on the shelf I haven't ever tried, but will.

The 120 Minute came and went Super fast though and have not been replaced yet. Also, the 75 Minute disappeared in a flash... though I found a shop with ten bottles about twenty minutes away. I'm really hoping to stumble upon another bottle of 120 because I'm saving one of these WWS to mix with it in my big mug.

120 always seems to sell faster than their other high ABV% brews. I guess there are more IPA fans out there than anything else. I really like World Wide though, and can't even imagine what it would be like mixed with 120. I'm sure it's gonna be crazy, whether it's good or bad.

It has a very cool bottle picture. :x