About: "A group of hop-heads and publicans challenged our Beer Camp brewers to push the extremes of whole-cone hop brewing. The result is this: a 100 IBU, whole-cone hurricane of flavor. Simply put - HoptimuM: the biggest whole-cone IPA we have ever produced. Aggressively hopped, dry-hopped, AND torpedoed with our exclusive new hop varieties for ultra-intense flavors and aromas. 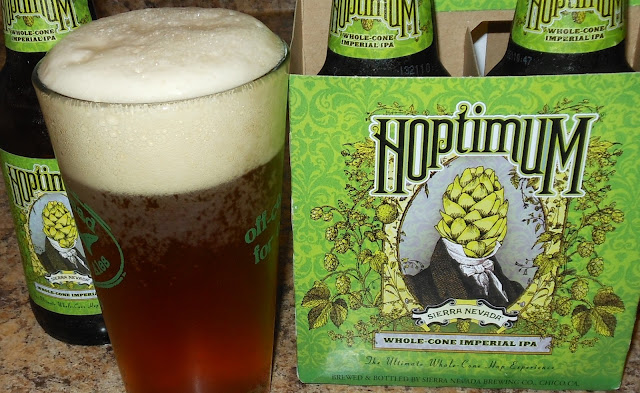 Thoughts: HoptimuM poured out a vibrant pumpkin shade of orange with an incredibly white bubbly head that puffed up topped it off beautifully. The beer is nearly transparent, but an abundant amount of hop flakes are drifting through space here. It's really cool looking.

The scent, as always when it comes to Sierra Nevada, is their trademark classic quality craft-work. This one smells very similar to their Torpedo actually, only a slight bit amplified. It's incredibly fresh and rich. It doesn't climb up the nostrils furiously like Southern Tier's Gemini (gotta love it), but rather slowly fills the senses like being locked in a plate glass room filling with a sweet poisonous gas.

This brew has an incredible peppery hop spice to it. It starts out really sweet and maintains that malty sweetness throughout, and though it's got an immense bitterness that gradually intensifies after each swallow, both of these aspects contribute to what just may be the most superior beer ever created. Why debate it? After warming for a short bit, the blending of all components on display here are presented flawlessly. It's caramel candied hops with a smokey citrus finish. This may not be the absolutely best Imperial IPA I've ever had, but this is a top 10 beer material and there's no fucking doubt about it.

The mouth isn't all too heavy, but it's just a little sticky and that flavor coats well.

This beer is incredibly easy to drink. You can tell that there's a strength to it, but it's not outright an exclusively hop driven experience. The balance that it has achieved is actually quite remarkable, and the booze is well hidden. Don't worry, you can still taste and feel the booze, and it makes for a more exciting aspect to the brew overall, but it is a lurker. After buying a four pack and a three pack I went out and found another three pack and snatched it up with a few more bottles of Bigfoot. I'm sure in the next few days another four pack will be my possession. I am, addicted to this shit.

I recently came across your blog and have been reading along. I thought I would leave my first comment. I don't know what to say except that I have enjoyed reading. Nice blog. I will keep visiting this blog very often.

I thought you'd like this one. I kinda wish they'd release this all year round, but thankfully we still have Torpedo... and now it's in a can!