About: "Bottleworks, Seattle's legendary craft beer store captained by Matt Bonney and Matt "Vern" Vandenberghe, celebrated their 13th Anniversary in March of 2012. Since bottle shop owners can't make their own beer, "The Matts" commission a different brewery each year to help them create their anniversary brew. This time they wanted an especially big beer (they were aiming for 13% abv), so naturally they turned to us for help. Here you see the delicious fruits of our collective labor: a 13-grain, 13-hop imperial porter that packs a wallop. Cheers! 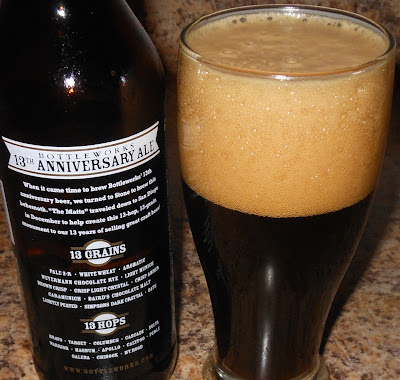 Funny enough, with all the specialty malts used, there were less fermentable sugars than anticipated, so it “only” got up to 11.4% abv, but we’re all still really happy with how the beer turned out. If for whatever reason, you’re upset that it’s not 13% abv, we suggest you take a sip, as it will immediately help you get over it. Hops: Bravo, Target, Columbus, Cascade, Delta, Warrior, Magnum, Apollo, Calypso, Perle, Galena, Chinook, Mt. Hood / Malts: Pale Two Row, White Wheat, Aromatic, Weyermann Chocolate Rye, Light Munich, Brown Crisp, Oats, Crisp Light Crystal, CaraMunich, Baird's Chocolate, Lightly Peated, Simpsons Dark Crystal, Crisp Amber."

Thoughts: Word of advice first off. Be careful when you pour this!

I tilted my glass and poured this brew out very gentle and slow when I got to the point where it looked as if a nice one and a half finger head had formed I set the glass down and it exploded all to hell on me!

Even with my gentle and cautious pour this beeer exploded once I set the glass down. The head furiuosly grew in less than a single second into an uproar and spilt over the top of my glass. The brew is dark brown during the pour and settles into a pitch black in the glass. The light brown kahki colored head that eventually settled down into a two finger showed no signs of going anywhere.

It pours like a Pub Ale with a Widget inside the can, and the forming head greatly resembles a Guiness pour. As I poured it I noticed it wasn't a smooth liquid, but had several clumpy bundles that fillled the glass with fun times to be had. 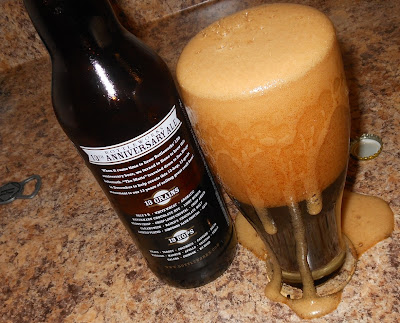 The smell on this one is pretty crazy. It stars out as a sweet almost barleywine type scent with dark fruits, the candy coated dried and sugared kind, plums and apricot mostly, maybe a little bit passion fruit and raisins, and a tingly boozy feel about it. Give it a few more whifs and some beautiful earthy hops start to mingle in. It smells strong and sweet, like a brandy... but doesn't go far from a recognizable strong ale. There's a heavy caramel candy tone to the whole thing, and luckily for me, it's light on the chocolate malt. After a while the scent of this brew reminds me of Southern Tier's OAT Imperial Stout. My stomach is growling.

Taste is a haze of grainy alcohol at first that starts to spike but slowly falls back before blinding. I'm getting a strong boozy caramel, very full flavored and followed by some grassy notes. It's very rich and flavorful. Nothing weak at all about this one. Pretty damn dense too. After getting used to the hops in the scent and the first few gulps, a roasted malt characteristic slightly takes over. It happened right when that puddle of foam left from the head right in the middle of the brew slid down my throat. Of course, the creeping hops are not far behind. There's a spicy tingle to each swallow followed by a cloudy haze that I can only describe as a state of exhaled joy. There's a high point to the sweetness in this one, but aside from that it's not really bitter at all or overly-sweet. It maintains well, even with that haze of booze and that sharp stabbing sickle of candy. It gets very peppery around the last gulp.

This is one sticky ass beer! Very syrupy and thick.

Overall this was a fun and interesting beer for me. I'd rank it pretty high, but I don't know if it would go on my favorites listing. The taste didn't blow me away or anything, but I'm tellin' ya, this beer was savory and just downright good. It's really hard to describe actually. Supposedly this is an "Imperial Porter", but it's got shades of Barleywine, Stouts and Smoked Ales. It really is an enigma of beer, but I'm not going to fault it for that. In fact, I think it's pretty damn cool. I must have experiecned about six different stages with this one and it made for a hell of a time. Especially on my empty stomach. Dinner has just been served.

Email ThisBlogThis!Share to TwitterShare to FacebookShare to Pinterest
What the... California Beer, Collaboration Brew, Porter, Stone

Sounds delicious. I'm gonna have to go find me a bottle. Stone has been putting out some pretty interesting beers in their collaboration lines. Got a bottle of TBA sitting in the fridge that I'm looking forward to trying.