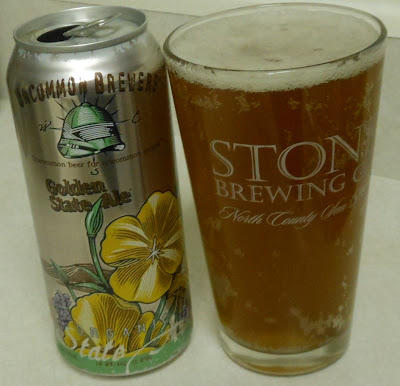 About: "Our beers are unfiltered, unpasteurized, and undoubtedly uncommon. The signatures of our Golden State are the mountain quail and the poppy flower. We can't make beer with quail - yet - and so we settled upon the poppy. How better to enhance the flavor of a traditional Golden Ale than to include the tanginess of toasted poppy seeds? Our Golden State Ale  blends the sweet bite of toasted poppy with the aromatics of an simple California yeast. It's crisp and light, but carries enough body for the self-respecting beer drinker to think, "This is an uncommon ale."

Thoughts: Caramel colored, rusty copper hue with a tiny crackling sliver of a head that dissipated just after I poured it (Here's the one lucky shot of the beer with a head on it). This beer is completely foggy, murky rather, and small clusters of bubbles are clinging all over the sides of the glass.

The scent begins with a Belgian yeast. It's sweet and toasty. There are light floral notes, and it's also got a light citrus tone about it... like a little lemon, or tangerine, or perhaps both mixed. The more I lean in the more citrus I get. While it's a low flow sensation, it still smells good before it fades out as I become accustomed to it.

This beer is very flavorful for such a light scent and taste. It's smooth and malty with a gentle tingling of peppery hops. There's a slight tangy bite to it, which isn't really sour at all. Am I chewing edible flowers or eating a bagel? It's all a little unique, but nothing here is over the top... far from it. I'd say that this beer is very enjoyable, and everything is in its right place. It's a bit of a strange one.

Mouth is light, crisp, not heavily carbonated and extremely easy to drink. Though, it does leave a thin layer of film on the teeth for some reason.

This is a crisp and refreshing Belgian Ale for the summer. There's no bad afterthoughts and it left a clean, if slightly sticky taste in my mouth. The ABV is high on this one for it to feel as light as it does, but it works out great. 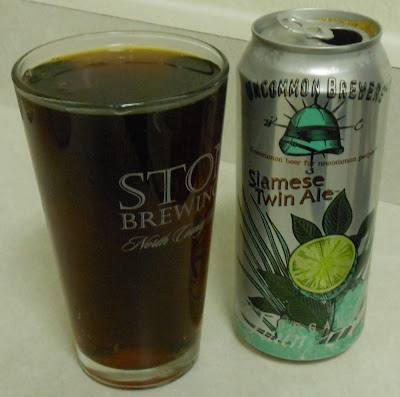 About: "There's a long tradition in Belgian brewing of using exotic spices to enhance a beer's flavor. Although many have been tried, coriander is undoubtedly the king. In tribute to this heritage we present to you our Siamese Twin Ale. It is a traditional Belgian-style Double seasoned with coriander and entirely uncommon Thai spices. At first surprising, the floral notes of lemongrass and sharper bite of kaffir lime blend with the deep malt of this double to produce a dangerously drinkable beer. Served alongside a fiery curry or enjoyed on its own, the Twin brings a taste of the tropics to every occasion. And who doesn't need a taste of the tropics every now and then?"

Thoughts: This beer looked just like Coca-Cola right out of the can, and the head, whatever there was of it in the first place, disappeared as I poured the thing. It's a dark brown with a touch of yellow around the outer edges. I think all the carbonation left when I cracked it open, and man that had to be the fastest fizzed-out head ever.

It even smells like a fizzy soda. Like Coke mixed with Sprite, only as a beer... and with herbs. It's got a natural type scent to it though, but it's weird and there's not much else to it.

I got hit with a heavy stinging alcohol out of nowhere. Strong herbs, light Belgian yeast, and a peppery bite are this beer's main attraction. It's unexpectedly good considering how it's so lacking in the look and scent. Those lime leaves and the lemongrass really come out through the sting and give the coriander and Belgian yeast / malt base a real interesting flow.

Mouth is like a flat soda. It's slightly coating and there's a mild burn once it warms up.

I started off with major doubts about this one, but as I got half way through and finished this I became a fan - of the taste at least! It's by no means a pretty beer, far from it, (that's probably partly due to the whole Organic thing, and of course the ingredients involved here) but in the end it's still pretty tasty. 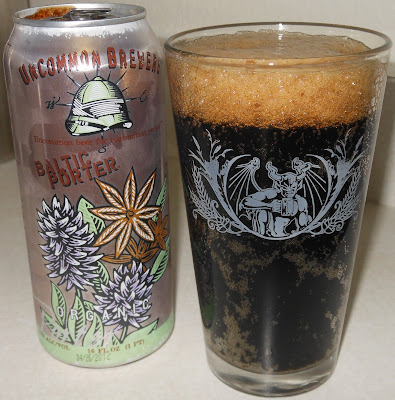 About: "Late in the 18th century Britain's great brewing families were working hard to break into new markets. For the Baltic Sea ports they created an export version of the traditional British Porter. Styled like an IPA to preserve them for the voyage, those profound Baltic Porters served to ward off the chill winds of that northern sea. That said, we weren't satisfied with the Baltic Porter's traditionally subtle hint of black licorice. This ale features a blend of whole licorice root and star anise to create an uncommon addition to that traditional export Porter's hearty character."

Thoughts: This one poured into a pretty deep looking black with brown edges. Though the huge bubbly head on this one faded nearly instantly (much like the company's other beers), there is an absolute ton of carbonation bubbles clinging to the glass and rising all over the place.

Took a couple whiffs and it's pretty pleasing on the nose. There's a roasted, chocolate malt tone that's enhanced nicely by the anise. A bit light on the licorice, but every ale I've ever tried with this ingredient has been so in that department. Even so, the licorice and anise really smell good here and it's giving me high hopes for the taste. Will I be let down?

Taste is... nothing but straight up coffee on the first gulp, nearly pissing me right off! There was no heavy coffee in the scent what the fuck. Take it easy Drunketh. Let's calm down and try that again: OK, so the coffee blends in a little nicer on the remainder of the brew. Seems as if it were just that first gulp that packed a punch, thankfully. Well, this one isn't at all that interesting. There's too much of a toasty coffee flavor throughout for me, even if it does fall back after a while. And while the addition of that anise is very welcome, I can't get past the fact that there just isn't enough of that black licorice flavor here.

As it warms, a little bit of a grassy tone comes through around the end of each sip. Though I'm not really a Porter guy at all (it's one of my least favorite styles), for some reason I always seem to gravitate towards the Baltic variety if ever I get the chance. I've not been too impressed by any of them, and this one is really no different. While all three of the Uncommon brews I tried were OK tasting, none of them really felt like true beer.

This sounds even more interesting than the Golden State Ale. Definitely gonna have to find some of these Uncommon beers. It's one thing to just throw crazy shit into the brew kettle, but to come out good... that's an achievement and something worth trying.