Much like my time spent playing Resident Evil 5 and kicking all sorts of ass while set out to achieve every Badge possible, I has always wished that this fun little awards system could be incorporated into some of the other hobbies of my life, such as Drinking Beer. I had already been documenting all of the strange and interesting beers I had been trying, so when I found out that UNTAPPD had a nice layout for the list, rating feature and Badges you could unlock (For example: Drink 10 beers from Japan to get the "Rising Sun" Badge) I just had to sign up. 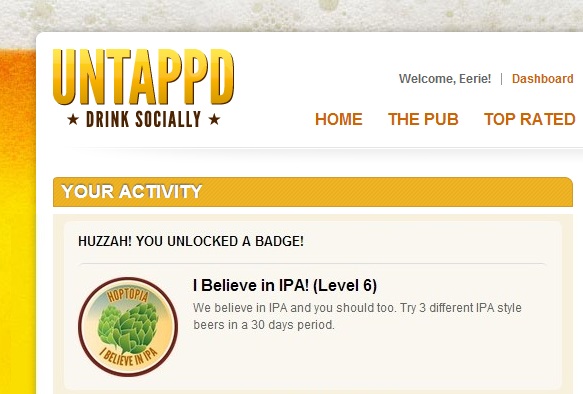 Check that out, I'm a Level 6 IPA hound. Something to be proud of in my opinion, and yet, something I know I should be at a far higher level thus far. I've been drinking IPAs from all over the place, but they've got to fall into that different style range to Level Up. I love trying new beers and any beer that I've never drank before, I'm very open to tasting. What I like about UNTAPPD is that these badges give you little goals to work towards. I want that Rising Sun Badge! And you know what, drinking 10 Japanese beers doesn't sound like a bad idea at all either. 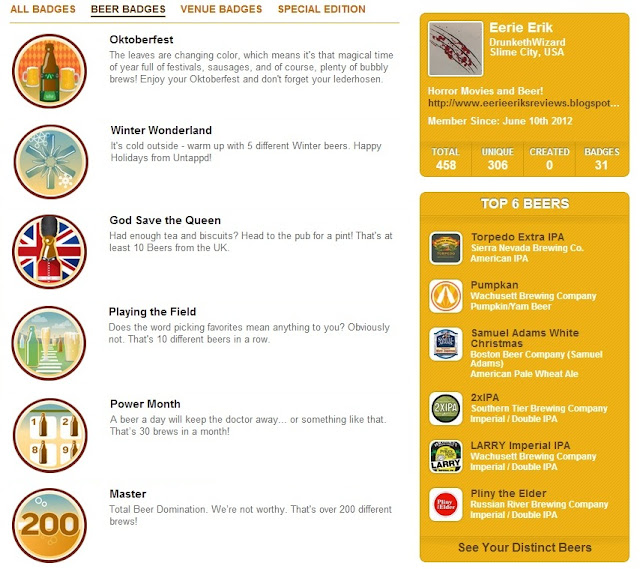 I'm at about 300 different beers right now and have to reach 500 distinct brews to get my "Legendary" badge. Sounds like a challenge that I'm down for. UNTAPPD is primarily set as an Ap for Iphones or Smartphones or whatever the deal is with those things and the site is pretty much described as a "social media" type thing. I don't do all that high tech gadget stuff so I use the website only version which doesn't have the feature to display what pub/brewery you're at or post photos (as well as a lot of other features I'd like to enjoy). If I drink something special at a bar or a party I'll list it when I get home, but "checking in" while I'm out drinking doesn't really seem like too good of an idea for anyone.


So if you're on UNTAPPD or going to join go ahead and friend me if you want (my profile page is up there in the link) and you can see what special toxins I'm allowing into my body and what I rate it. They've got most every beer logo on there, categories, you can make a wish list, after you've developed a long list of beers you've drank you can sort them by Highest ABV% which is pretty cool too. So why wait, start getting awarded for beer consumption now. As if consuming beers wasn't awarding enough. ;)

And yeah, I posted this on Super Bowl Sunday... the day the server crashed and burnt. Who knew drunkards would be logging in by the second while watching the game.