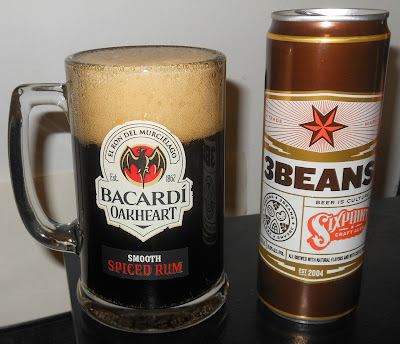 About: "Celtic lore spoke of a land where the beer fell in showers and the music of the gods could be heard. Brewed from beans and barley, this ale was so dark, rich, and satisfying that no gathering ever went unthankful. Prepared in cauldrons and consumed from horns, this was truly the drink of the gods. Centuries later, a towering, all-sating dark ale has been resurrected at Sixpoint. With a silken mouth feel despite a hefty 10% ABV, 3Beans is the result of myth, tradition and innovation. The collaboration of three New York City companies sincerely committed to their craft brings to you the biggest beer Sixpoint has ever canned.

1. The first bean sprouts from tradition. Romano beans are included in the mash, their proteins giving extra body to an already rich ale. Northern brewers of yore, short on malting barley due to finite harvest times, have used the hearty beans to supplement their ales for centuries. 2. Cacao beans from Mast Brothers Chocolate, the first bean-to-bar chocolate makers in New York City, are the second of the triumvirate. Mast Brothers makes only super dark chocolate, with no milk or butter, that displays their beans’ uninhibited flavors. Using a specially-made, small-scale cacao bean winnower, they separate the fatty nib from the outer husk. While these husks are not used in their bars, they are packed with dark chocolate flavors. In the 3Beans mash, loads of the shells are included along with the beans and barley malt, accentuating them with savory chocolate flavors. 3. The final bean comes from Stumptown Coffee, a company equally committed to showcasing their product’s natural character. Post-fermentation, the beer is blended with Stumptown cold-brewed coffee, a specifically calibrated concoction perfectly intense for the process. The infusion heightens the brew with rich, roasted coffee flavors and presents another layer of complexity.

Finally, 3Beans is aged on toasted American oak, which provides woody vanilla notes and further enriches the body. Ancient brewing techniques in concert with innovative methods and the finest products have produced a brew that triangulates the spirit of the Sixpoint Motto… Beer is Culture. For more info about 3Beans, click HERE."

Thoughts: If you're going to drink any kind of porter then you better damn well make sure it's a Baltic Porter. That's what I always say. 3BEANS poured a brown sludge like color that formed into such a dense black that there's no way in hell you'll be seeing through this one. The head on the beer exploded upon the pour and featured a light tan color resembling a fluffed dessert topping.

Smells cold. You know the smell of cold right? There's a perfect balance of coffee and chocolate here. I'm also getting cherries, and tons of em. Smells of sweet cream and candy... high quality stuff too. A little bit of booze, a little bit of smoke, and some vanilla. I know I always say this but if soft serve swirl ice cream was mixed with a few of those crunched up cherry liquor chocolate candies and then poured into your morning coffee, it would be this beer.

The taste on this one is pretty intense. Not overwhelming by any means, but it hits strong and you feel it in the gut. What I like about this beer straight off is that it doesn't hit you with straight up coffee or chocolate, but rather some thick malts and a lot of dense hops which is surprising. It tastes like really dark beer, but not generic at all (like some seasonal fillers from Sam Adams for instance)... a well made brew that's up front spicy, flavorful and smokey, with a little bit of char on the end and a fruity tang. It's borderline burnt, but man does it really work out well here. Once that burnt sensation kicks in, so does the heavy haze of booze and it just covers its ass properly. When it falls back you get the true nature of the brew and it's all blended together quite well, and yet you can pick apart different things you like about it. There's a long lingering taste in the mouth that you can only attempt to fade out, but it's not going anywhere. There's a heat throughout the whole beer too. Drink it ice cold and you'll still feel a burn inside the mouth. It's spicy and instantly warms, even before you swallow, which is pretty weird.

Mouth feel is a little on the light side, yet really creamy. It swirls nicely and goes down with a flick of the ol' wrist. There's a film coating the inside of my mouth and the taste is just embedded into my inner skull. I taste this everywhere. Aftertaste gets a bit rich and salty. Starting to notice some green beans and broccoli, grass and pussy juice. No complaints here. This is some good stuff. I would have liked it slightly more if it came in tall thin 16 oz. cans instead for the same price though.

Pretty happy about not only getting a badge for this one, but also the honor of trying a brand new beer that tastes great and didn't let me down. Three things right there that I always enjoy, thanks to these three beans.

Email ThisBlogThis!Share to TwitterShare to FacebookShare to Pinterest
What the... Barrel Aged, Beer, Porter, Sixpoint, Untappd