How do you top a scene where a really hot, frizzy-haired, stuck up chick gives birth to a demon out of her back of all places? Well, have a fucking six year old kid birth an even shittier looking demon out of his chest!! That'll show 'em. Demons really set the standard for some gruesomely outlandish shit back in the day. In fact, it was so completely awesome of a film, that the only possible option for a sequel was to simply mimic it. The bar was obviously set too high, and while I've heard ideas from the filmmakers themselves that would have made the next film darker and a lot more grim, what eventually happened turned out to be just a silly rehash with some admirable distorted features. The following may or may not be one of them, depending on how you appreciate your schlock. Here's a scene from Demons 2 where a pregnant lady fights off a six year old kid who's been infected by the demonic virus from hell, and well... one of them is going to give birth! Hope you got a bucket full of buttered popcorn, bitches. 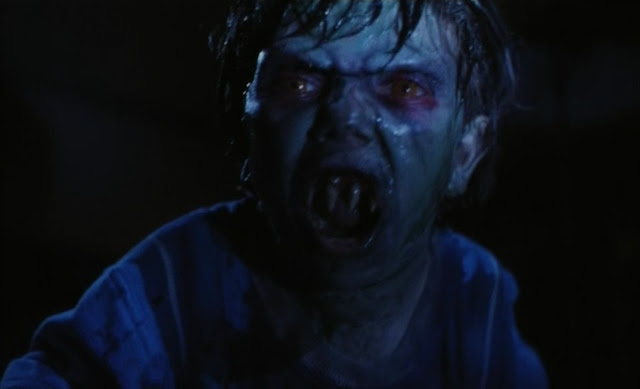 Snargle used to be a quiet young boy named Tommy who liked to watch scary shows on television and play with all his toys (a melted Castle Greyskull, Fisto, his favorite ray gun and his protective sidekick, a knock-off Snarf doll). He may not have been the smartest kid when it came to answering the phone, but you can't blame him for having shitty parents who didn't give a fuck. Tommy did however display one useful skill for a boy his age when he came across a thrashed room and some free roaming demons: he hid. Even though he was completely scared shitless, Tommy managed to clench those little butt-cheeks of his and keep his quivering trap shut as he stood silent as a statue inside a crawlspace behind a wall shaft. He felt the fear that night alright, but didn't let it overcome him. Tommy kept his cool, even when an ass ugly demon veered its head inside of the shaft and looked around, foam-a-droolin'. 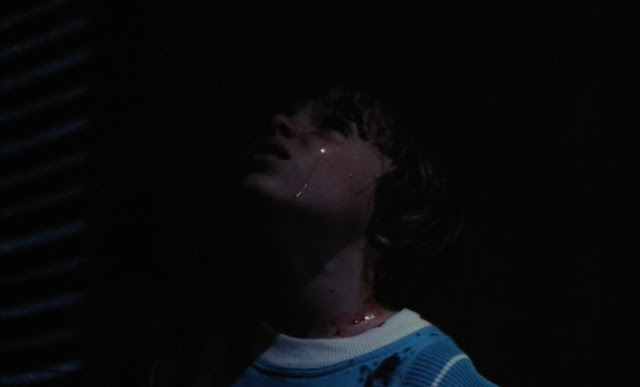 But there was no Luck of the Irish for little Tommy on this fateful night, oh no. Just moments after he had successfully eluded that nasty demon wench, some of Sally's blood came dripping through the ceiling area and onto his neck. The look on his face was that of confusion as tears streamed down his cheeks, and the sinking in the viewer's hearts was that of him now being totally fucked! Nobody in this movie is safe I tell ya... nobody. It was only a matter of time before little Tommy transformed into some kind of childlike abomination of a demon. A little freakazoid who's favorite Nintendo game is now track and field on the blood of his victims! What a slippery slope these child actors go down indeed. I have a feeling little Tommy was alienated enough throughout his short life... that all he really wanted when he turned rabid, was a friend to play with. And the only other kid in the building, well, that other kid is in that pretty lady next door's belly.


After being unnerved by strange noises, Hannah walks towards her front door. Checking through the peephole, she sees nothing, but hears the voice of a young boy instead. She's suspicious of course... I mean, who wouldn't be? Peepholes are creepy as fuck, dude! But this kid is just so convincing with his frightened pleas for help. "Come on lady... my Sega broke and now I'm all alone." Hannah buys into his tearful blabbering, and like an incredibly sexy woman with a compassionate side would, she slowly opens up her entry way for the young lad. And that's when it happens: 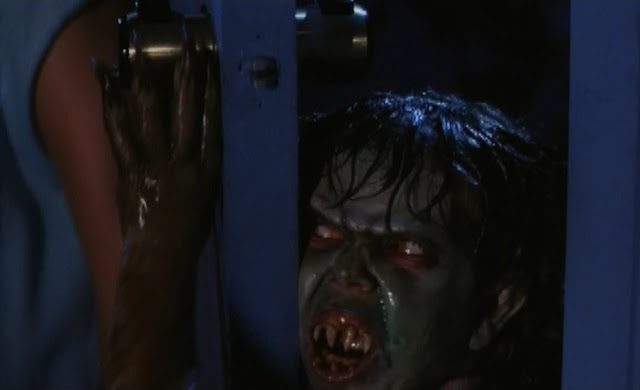 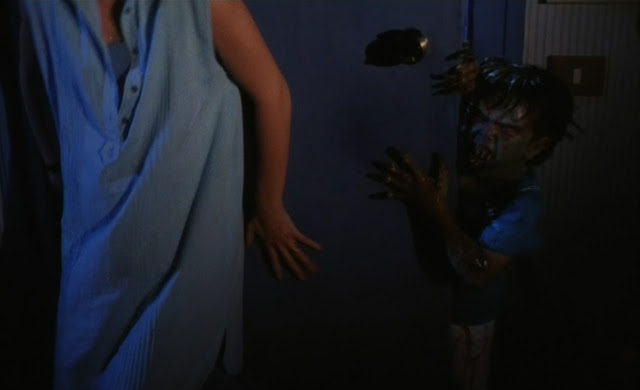 He ain't no Leprechaun and her belly ain't no pot... of gold, that is. ;) Hannah screams in terror as this little fucker furiously dry humps the door for a few minutes. He's gargling n' shit and she's freaking out while he scratches everything he can get his claws on, while getting seemingly closer and closer to her arm. He edges his way through eventually and she just backs up and tries desperately to come up with a new plan. What in the hell should she defend herself with... a kitchen knife perhaps? Surely there's something else in this apartment aside from plants and textbooks! 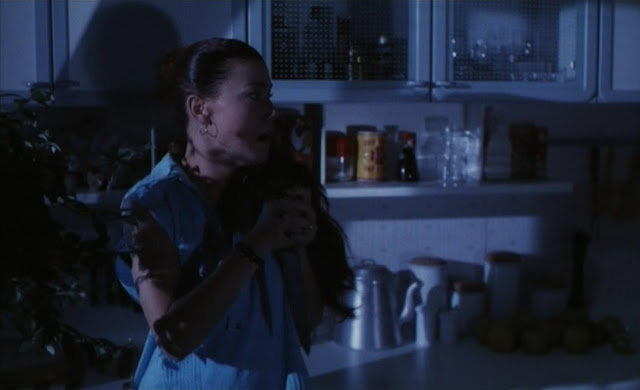 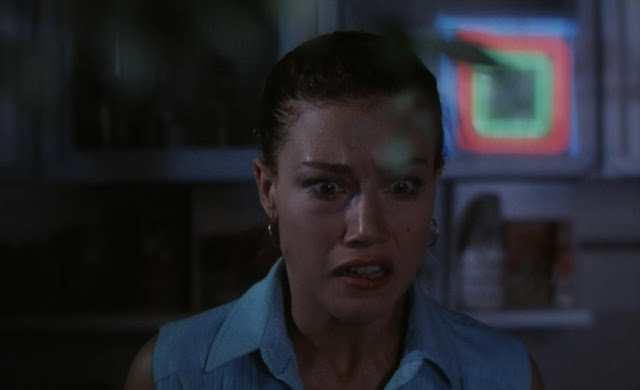 There's about a twenty second stand-off with a table between the two, and just when it's about to get interesting, the kid grabs his stomach and starts convulsing. He starts screaming, falls on the ground and wiggles about like he's having a seizure. All of a sudden, something starts popping its way out of his chest, Alien Style! Man... this is going to be good! I can't wait to see what the hell this thing is. And then it happens: this thing, looking like Grover and Kermit the Frog simultaneously ass fucked Miss Piggy to death and her still decomposing corpse produced a horribly disfigured and slimy baby - something out of an early Peter Jackson film - emerges and totally fucks up the integrity of the scene.

Snargle's baby comes out and the film turns from cheese to camp. Where in some areas it seemed as if the director and producer wanted to go darker, scenes like this proved that they either didn't really give a shit about the tone of the film... or that they were just high as fuck. There are probably a lot of factors in play here, the most prevalent being they wanted to get the film out as soon as possible after the immediate popularity gained from the first. A lot of great ideas had come up and were incorporated into the story, and a lot of them turned out really good.... but a lot of the good ideas they had, ended up turning to shit. Lovable shit, of course.

So little Snargle Nug rips his way out of his host parent/child and smiles like a little freaky freak. He chases Hannah all around the apartment like a maniac, but eventually slips up and she gets the better of him. Snargle 2.0 gets trapped in the fold-up wall bed, and as he attempts to claw his way out, Hannah runs over to her table of product (which just happens to be surrounded by mood lightening candles) looking for something to defeat this demonic puppet with. I wonder what she'll grab right off of that easily accessible table? Perhaps something that every pregnant woman should keep next to her vitamin C chewables, hairspray and moisturizer? 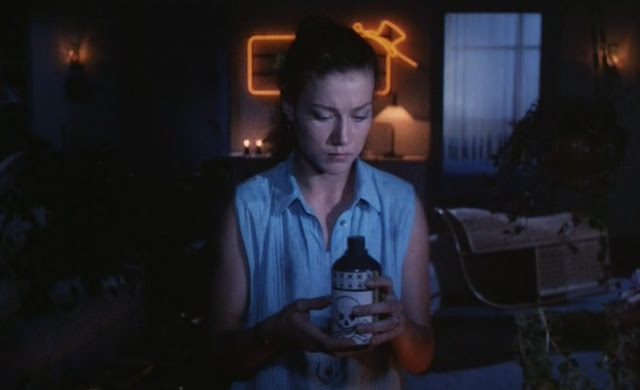 
Every pregnant woman should keep a large bottle of poison with a skull and crossbones on it right in the middle of the living room. I happen to keep a bottle in my house on my waist-level shelf at all times, just in case. I also like to keep one in the fridge next to all my beers... you know, because I too like to live dangerously. I'd expect a poison bottle with a skull and crossbones and that many XXX's to be just sitting around in some lab run by a mad scientist or something, but not in the apartment of two preppy's with an affinity for 80's neon glowing signs and the artwork of Patrick Nagel.

Okay, so maybe all that stuff is for her two thousands plants that she's got in the apartment. That's probably her hobby or something. But poison? Really? I'm no expert or anything on growing plants (as far as the police know) but do indoor plants get weeds? Wouldn't killing the weeds with poison hurt the plants themselves? No matter. In fact, watching TruTV has taught me a thing or two about women: They've always got poison stashed somewhere. If it's not out in the open in the middle of the living room, it's probably in their boyfriend's, husband's and/or baby's body. Women are sick like that!

Hannah pours the acid onto Snargle's spindly fingers and he squeals in pain. He retreats shortly after and all becomes quiet. Just as Hannah lets out a sigh of relief, the bed come tumbling down and Snargle hops onto the back of her neck! She freaks the fuck out and squirms all other the place. There's no telling if he's scratching her or what the fuck is going on, as their apartment's psychedelic lights and neon signs are blinking and flashing and going dim and everything is in strobe effect. But when it all stops, it turns out that I was right all along! This little fucker just wanted a friend to play with. Awwwwwww... look at him. 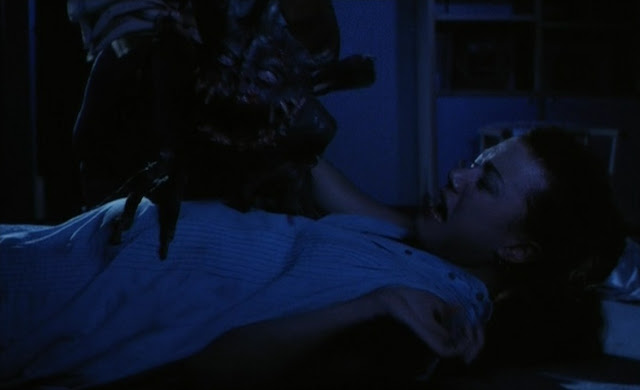 
Just when you think Hannah is all done for, George bursts into the room (Finally!) and shoves the only weapon he can find in a second's notice, an umbrella, straight up Snargle's little bitch ass. The sharp tip of the instrument comes out through his mouth, and plugs him up against the wall. Pus comes flowing from his stupid little eyeballs and grue drips all over the place as he writhes in pain, stuck like a retarded Shadowcat in a Portal. It's disgusting. 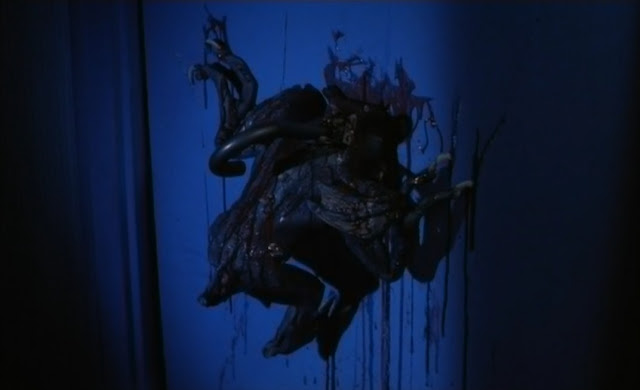 Thus, was the end of Snargle, and his wacky escapades.

Thanks for reminding me of Snargle. He's good (daemon) people.

Finally watched this movie. Loved it!

How can anyone not love this flick!?