"Nightmare Music Guaranteed to SHOCK!" You got that right. This is some hardcore bad dream inducing music here, and I know it because I've listened to this about thirty or so times while sleeping. If you're looking for some warped, twisted and fucked up dreams then try it out. For this madness inducing piece of work, I Libra (lead by former Goblin drummer Walter Martino) took jazz infused progressive rock to a new level of avant-garde, psychedelic and disarranged experimentation. With distorted sounds, off beat rhythms and a totally chaotic atmosphere, the songs of Schock constantly trial off much like waves in an acid trip, yet always seem to blend seamlessly back together into  another new frenzy of uneasy listening. 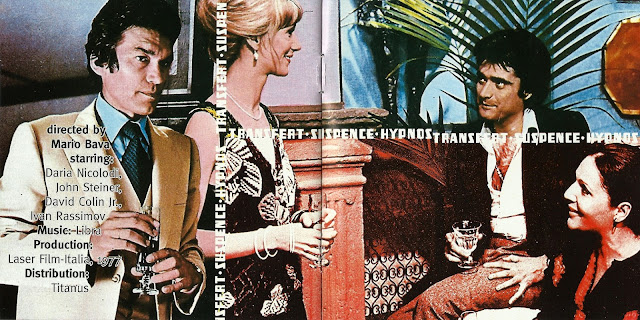 Schock is a supersexy-swingin' film (see the above photo) about a woman going absolutely batshit crazy and losing her goddamned mind! The accompanying music of Libra is so utterly triumphant at creating the perfect representation of her crashing and crumbling mindset with its pinball-inside-the-skull type pounding grooves, that it may in fact be too powerful of a soundtrack. You read that right, listening to this soundtrack has a brain stimulating effect that triggers anxious, relentless and diabolical tendencies among even those considered mildly insane. It's heavy stuff, doc. I can only imagine what a full blown psychopath would do if he were hooked up to a device that played nothing but this music. Perhaps he'd say that he already owns that album... inside his head, that is!!1 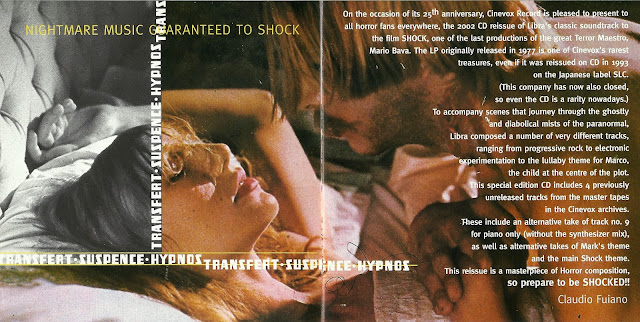 I was watching One Flew Over the Cuckoo's Nest the other day and during the scenes with Scatman Crothers and Jack Nicholson together I couldn't help but think of this movie. Just look at him and Jack getting on like old friends... if he only knew that five years later in The Shining he'd be shockingly killed with a fucking Axe! Then there's Daria Nicolodi and John Steiner... not only is he killed with a pickaxe to the heart in Schock (see that last photo above), but he's also done in with a fucking Axe five years later in Tenebrae (also starring Daria) as well. Coincidence!?

Perhaps. Wait a minute? Wasn't Scatty murdered with a pickaxe in One Flew Over as well? This shit is just getting too damn weird. Hey, you wanna have a fucked up, weird-out, movie marathon night? Then I suggest you watch One Flew, followed by The Shining and Tenebrae, then end it with Schock. Every time someone has a psychotic episode you've gotta chug a beer, and every time someone is killed by an axe (of any variety, including pickaxes and Nurse "Hatchets" har har har) you've gotta take a puff off the ol' peace pipe. Tell me I'm not brilliant.

Check out the soundtrack for free HERE on youtube. Track 2 really reminds me of the flower power stuff that David Hess did for the Last House on the Left soundtrack. It's so mellow and late 70's maaaannnn... if you haven't seen this film then don't even hesitate to buy it and not thank me later. I seriously am in love with this movie and the soundtrack as well. Consider it highly recommended. D'eth out.