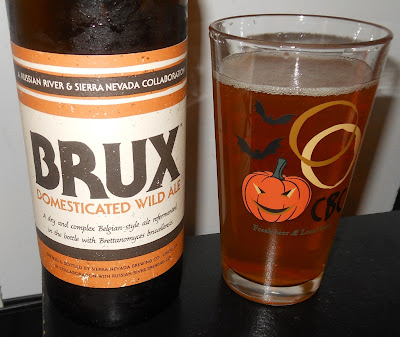 About: "What began as mutual admiration between Sierra Nevada’s Grossman Family and Russian River’s Cilurzos has grown and progressed into genuine friendship. Brux began as an idea and has grown into something altogether different: The liquid manifestation of change over time. Refermented in the bottle with Brettanomyces bruxellensis, Brux will change and develop over time. Copper-colored, dry and complex, with slightly tart notes of green grass, pear, spice and lemon - this ale will progress in the bottle for many years."

Thoughts: The cork popped off with a fair amount of pressure and smoked like a gun out of some kind of Film Noir. BRUX poured a really light yellowish, apricot color with a huge erupting head of tiny bubbles that faded damn near instantly. While the beer is a total haze, you can still see vast amounts of carbonation bubbles rising up like crazy.

Smells really crisp, really sweet, with some lighter Belgian yeast... spicy notes, and there's a little bit of an apple cider-like spice to it. Very fruity and tart with a hint of pear, but mostly a green apple crisp type of thing going on.

Intense first gulp! A blitzkrieg to the mouth, even with the smokey aftermath. It happened so fast. Let's try it again... it tickles. The carbonation in this is off the fucking charts here and just attacks the tongue viciously while the tartness and flavors pounce all over the place. It really is "wild". It doesn't let up either. Every single gulp has a tang to it, a haze to it and it's just fucking raw tasting. I like it. It's like, almost fuzzy feeling. The finish is really dry, but not super drying.

This really reminds me of a mead. With that cider like consistency and a little bit of a honey flavor in there at least. After adjusting to the immense blasts here a little bit more flavors start to come through. Earthy leaves, bundles of hay, and a lot more of that yeasty base. It's not really funky, but there is a degree of funk there, only it's not really unpleasant by any means. I did let this sit in my fridge inside a paper bag for about six months or so though, since I heard it was pretty rough upon initial release.

I was really expecting that wild yeast to be a huge factor and very up-front in the beer, but perhaps it's fallen back a little bit because it is blending rather awesomely here. It's pretty cool how it starts out like a hard cider / farmhouse type brew and ends up tasting a bit like a spiced ale. I guess this one really played a lot of mind tricks on people. For me I waited the right time, since well... any time I open a beer it's the "right time". But I'm pleased that I got a bit of the strange along with the unusual here.

Mistransformed, transforming or just malformed to begin with, well, who's to say? Some people online try to act like they're the shit, or shiznit if you will, saying that they drain pour $14 bottles of this, that, and other beers. You wanna know what I think? They're a bunch of lying fags. Yeah. I don't drain pour nothin', especially bottles over three dollars no matter how horrid it may be. This one wasn't bad at all though, just saying, so keep rolling with those cheek punches babies.