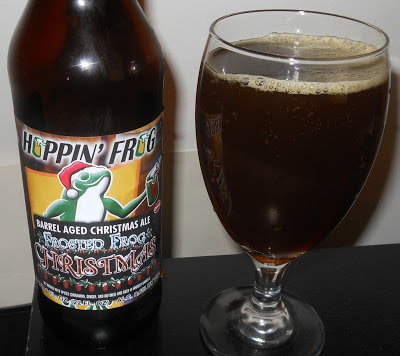 About: "Barrel-Aged Frosted Frog Christmas Ale has a familiar and satisfying combination of carefully blended Christmas spices in a flavorful nut-brown ale, its like a Christmas cookie in a glass!

For a rare seasonal specialty, Barrel-Aged Frosted Frog is a great treat, expertly aged in oak Bourbon barrels for 12 months! As the angel’s share evaporates, the barrel-aging concentrates the malt flavor, and lets the spice character mellow for an incredible taste combination! Frosted Frog’s Christmas spices blend with a tasty vanilla note and a very slight Bourbon character imparted from the barrels for a wonderful, savory flavor combination. With all these additional flavors, Barrel-Aged Frosted Frog is perfect for any Christmas ale lover or true beer aficionado!"

Thoughts: I've been looking forward to drinking this beer since December 13'th, 2011, after trying their standard seasonal version and finding out they make this one. Popped the black cap off of the bottle, and I couldn't resist taking a whiff! Yeah... me happy. BA Frosted Frog poured a deep mahogany with little to no head whatsoever. The sliver of a head that was appeared to be a light tan one that left a small ring around the glass. Though pretty dark of a beer, I can tell that it's slightly cloudy.

This is one gorgeous smelling beer. The cinnamon and sugar here is immense! Just like the regular version of the brew, it smells just like freshly baked cinnamon rolls covered in vanilla frosting. Pure awesomeness. It's very bready, a little peppery and just reeks of sweetness. I love it. The barrel aging doesn't overpower the scent in any way, just kinda forges a deeper tone throughout. For someone like me, who never indulges in "sweets", this sure does remind me of the snowy and cheerful season.

First sip, and I'm blown away. What a beautiful liquid. Prepare for a smack to the cheeks at first. The barrel aging has toned down the spices here, but not as much as I had feared it would. In fact, the essence of the original beer is perfectly in tact and still quite abundant, only now it's got a heavy woody note after the swallow. The taste is like pounding a gingerbread house down to a pulp, squeezing it into a glass and drinking it. It's really malty, spicy, sweet and tastes beautiful. The little bit of bourbon that's creeping through gets a little stronger as the beer warms and it's a welcome change of tone while drinking this beer slowly and savoring it. Though cinnamon is the dominating factor in the scent, the nutmeg and ginger really shine through in the taste and blends stupendously with the liquor. This is a beer that you have to drink slow, and for every new sip it's totally worth the price and time to do so.

The mouth feel is pretty creamy and soft, and it leaves a slight burn at the back of the throat. The cinnamon brings about a dryness to end it all, but aside from that this is one silky and sultry brew.

A lot of people aren't into Pumpkin Ales or Cinnamon Roll Christmas Ales, calling these beers "abominations", and those people I like to refer to as Idiots. Frosted Frog is the perfect holiday ale, and there's no doubt about that. I have never actually favored a Barrel Aged version of a beer over its original form as of yet, and this beer is no exception. BA Frosted Frog is downright amazing, but unless you get the itch and find this bottle in front of you at some point, I say just enjoy their Frosted Frogness any way you can. But believe me, once you try the original, nothing will stop you from hunting this version down. It's that addicting.

Email ThisBlogThis!Share to TwitterShare to FacebookShare to Pinterest
What the... Christmas Beer, Hoppin' Frog, Winter Warmer

I would never call Christmas ale (as a concept) an abomination. They're great, even if I don't drink them with any regularity myself.

There's just too much good horror and beer out there.

I wanted to say thanks for the great posts. I've been a follower for some time (can't quite remember how long) and keep a drinking/gaming/horror blog myself, though I'm not quite as organized in layout as you yet.

Well thanks for the comments. It's nice to know that somebody out there is reading. ;)