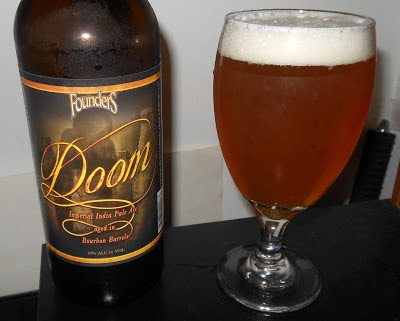 About: "Doom is unleashed when Founders’ award-winning specialty Imperial IPA, Double Trouble, is aged in bourbon barrels for four months to create a distinct flavor experience. So, while Double Trouble is brewed to turn your world upside down, Doom is brewed to tear it apart: pungent hops conspire with boozy bourbon notes to send your senses spinning. Known as “Hand of Doom” when originally brewed for our taproom, this 10% ABV beer is a unique addition to our barrel-aged repertoire, which has mostly consisted of malt-forward beers such as Backwoods Bastard and Kentucky Breakfast Stout.

The Backstage Series brings some of our most sought-after and experimental taproom beers to a much larger audience. Every single 750mL bottle of these limited batches is intended for Founders fans to share, celebrate and thoroughly enjoy. And each release affirms that, as a small brewery, we are following our passion: beer that is brewed for us. It will always be about producing the best beer we can and offering it to those who share our enthusiasm. Backstage Series beers are brewed sporadically throughout the year in limited supply. These beers are not on a set schedule and may or may not ever be brewed again. Regardless, rest assured that whatever comes next will be amazing and unique."

Thoughts: DOOM poured a yellowish color out of the bottle that formed into light, slightly orange golden honey-like hue. It's got a one finger super opaque white head with all different shaped bubbles. The beer is really cloudy and there are quite a few carbonation bubbles rising up from the center of the glass and even around the edges.

On the first whiff out of the hissing bottle I got a strong double IPA for a single second before a rush of bourbon barrel oak flooded in and consumed it. Pouring it into the glass and leaning in I envision kiwi, pineapple, grapefruit and... coconut. This really smells like candy. Like guava fruit roll-ups with little shreds of coconut on them. Very juicy and fruity and tropical. As it warms more of that vanilla like bourbon comes out.

This stuff is absolutely insane! Liquid candy makes you dandy. It's all those smells I listed above but in a wet juicy explosion of marvelous flavors, with a bitter haze at the end of it all and a mellow woodsy aftertaste riding it out. The sweetness, bitterness, and bourbon addition all go through stages. It's got strength around the back, it's peppery around the middle and boozy after each gulp. Aside from the more dominant flavors, there's a malty backdrop that's sweet like honey. This one is real big on flavor all the way through. It's great. Loads of complexity.

Doom is some pretty heavy stuff. It's tingly in the mouth and has a great peppery sensation to it. It finishes a bit dry as well. The beer mellows slightly over the time of long sipping and gulps... but it stays incredibly tasty and those barrel flavors really come out. It's got a fruity punch that still hits hard with each taste even after you've let it settle inside you for a while. This is some fine drinking.

Email ThisBlogThis!Share to TwitterShare to FacebookShare to Pinterest
What the... Barrel Aged, Beer, Double IPA, Founders

Thankfully I can say that Doom is one of the very few new beers I've been able to try recently. And the first of Founder's Backstage Series that I've been able to get my hands on. Man, what an amazing beer! I've had other oaked IPAs, but the tropical flavors that this beer unleashes on your pallet are fucking insane!

The closest thing I've had to this flavor experience was in Allagash Curieux. It's a Triple, so the base flavor profile is very different. But Curieux also has tropical fruit and vanilla flavors all wrapped up in a warm oaky bourbon blanket. Wondering if they use the same brand bourbon barrels? It's really interesting to taste barrel aged versions of much "lighter" beers than an Imperial Stout. I can't wait to try this again.