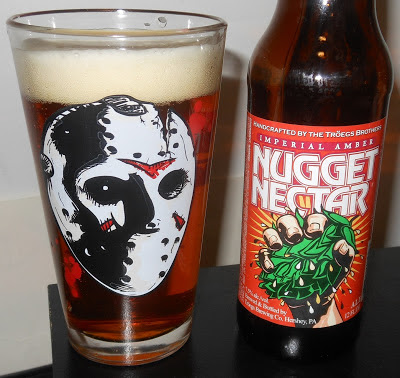 About: "Squeeze those hops for all they’re worth and prepare to pucker up! Nugget Nectar Ale will take hopheads to nirvana with a heady collection of Nugget, Warrior and Tomahawk hops. Starting with the same base ingredients of our flagship HopBack Amber Ale, Nugget Nectar intensifies the malt and hop flavors to create an explosive hop experience. Malts: Pilsner, Vienna, Munich / Hops: Nugget, Warrior, Tomahawk, Simcoe, Palisade / HopBack Hops: Nugget / Yeast: Ale."

Thoughts: I decided to go with my Jason Voorhees glass since that hand squeezing the hop looks a bit like Jason crushing some dumb slut's head.

Poured a bright orange with some reddish tones in the shadows and a white head that was relatively small but lasted for a moment or two. The beer is ultra clear and there's a bit of abundant carbonation slowly arising.

This smells really good. Fruity. Loads of hops. Tons of orange. Grapefruit, cut in half and dipped into a plate of sugar. Hint of kiwi. But mostly oranges and sweet oily hop presence. Just by smelling this I can see why it's so popular. I bet it's got a simple yet effective malt bill that perfectly compliments the hops used and allows them to shine through. This reminds me of the west coast. Wonder how it tastes.

Nicely done. The taste on this one is very damn good... not incredible, but it's actually almost there. I wonder why these guys would move from Cali to Hershey, PA of all places anyways. This beer has what some may consider to be a perfect balance. For me it could use just a little more strength, just a touch, but man... the long lasting sweetness that swirls around in the mouth at first that leads to the gentle bitterness just before the swallow and that raw kick in the tongue hits. Killer. Belch a few times just to experience the fun of what you just let inside you.

Double N leaves the slightest film inside the mouth, but it's quickly licked away. The after effect however is going to stick around for a long while. This taste doesn't fade. It may take a few hours. This is one slick brew. A little watery but damn flavorful. It's got a low level dank that just lasts throughout everything and that's the best thing about this one. If you like dank, and the smell, then you'll like this one because that special flavor just embeds itself in your senses.

Email ThisBlogThis!Share to TwitterShare to FacebookShare to Pinterest
What the... Amber Ale, Beer, Spring Seasonal, Tröegs

Great beer. I think there's a couple of bottles hiding in the back of my fridge come to think of it...