About: "For Burton Baton, we brew two "threads," or batches, of beer: an English-style old ale and an imperial IPA. After fementating the beers separately in our stainless tanks, they're transferred and blended together in one of our large oak tanks. Burton Baton sits on the wood for about a month. When enjoying the Burton Baton, you'll find an awesome blend of the citrus notes from Northwestern hops melding with woody, vanilla notes from the oak. The wood also tends to mellow the 10% ABV of Burton, so tread cautiously!" 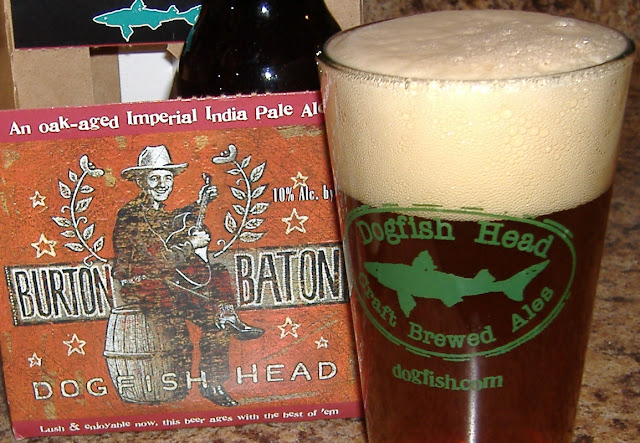 Thoughts: Burton Baton poured a very rich golden orange, almost pumpkin color, that was transparent enough to read backwards letters through and had a huge fluffy light beige head that showed no signs of dying down at all in the near future.

Well, the scent if definitely that of an IPA. It without a doubt smells absolutely wonderful! First off, it's sweet and peppery. Just the way I like my hops. It's a little bit fruity, with a light pine background. There's a bit of a spicy kick that tingles.

Aside from the haze of imperial alcohol, the first thing I'm getting is vanilla and oak. It's very nice. A lot of pepper after that, which I also enjoy tremendously. It gets a little bitter after the swallow, and that's where the citrus and piney hops linger. After finishing a bottle there's a real mellow and soothing taste in the mouth. This is one fine tasting beer. It's not overly exciting, but it'll leave a smile inside of you.

It's a little fizzy and a bit watery as it starts to warm, but full felling and robust when cold.

The taste of this beer is overall quite pleasing and I like it a lot. It's a bit pricy as two bottles are pretty much the price of bombers, but it's nothing I haven't gotten used to. Especially when I find out I actually like the beer, it's not such a sour taste left on the brain. I'm saving a bottle of this for sometime in the not-so-near future, as I don't plan on buying this again with so many other beers out there that I've never tried. But I do look forward to the day I pry the cap off that one leftover bottle.