About: "Not only the first brewed Scottish stout to join the award-winning Innis and Gunn portfolio, but the world's first beer to be aged in the former triple-distilled Irish whiskey barrels, a result of the company's mission to produce flavorul, appealing and sensational oak-aged brews. It all began in October 2011 when Innis & Gunn’s Master Brewer and Owner, Dougal Sharp, filled four hundred rare oak barrels, previously used to mature whiskey from a famous Irish distiller, with their specially brewed stout. As the beer matured the flavor seemed to improve more and more and come into its own as time passed. After aging the beer for sixty days, and using a three-step maturation process, it was finally ready to be released. Malts: Chocolate and Roast Barley / Hops: Fuggles / Woods: Rare triple distilled Irish Whiskey Barrels / Aged: 60 days / Maturation: Three separate maturations follow fermentation; oak maturation, cold maturation and in bottle." 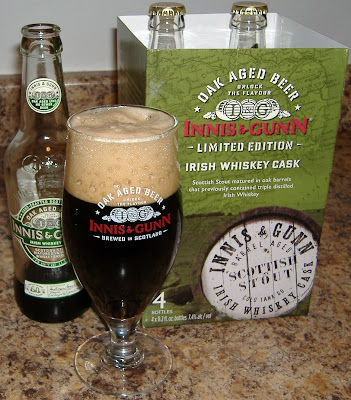 Thoughts: This beer poured a dark brown with burgundy tones out of the bottle and left a solid, near black inside the glass. The three-finger khaki colored head formed quickly even with a very careful pour and not a single bubble popped for about two minutes.

The smell of this is definitely unique. The Irish whiskey in this is actually pretty mild (much unlike their insanely strong smelling Highland Cask which was aged in 18 year old single malt Scotch Whiskey barrels). This stout smells very sweet and the oak barrel notes linger throughout the entire scent. There's little hints of chocolate and vanilla at the same time. Very nice.

It's like candy. Sugary sweet, a little bitter midway through, but offset with this almost ice cream like flavor. The alcohol haze at the end of this, before the roasted toasty aftertaste sets in, is so remarkably light... but, it compliments the beer so well. This one seems to go through about five stages of flavor sensations, and each one is just fucking beautiful. After finishing off a bottle the tastes fade away rather quickly, leaving only a thin layer of oak on the tongue.

This beer is very smooth and silky. Mouth feel is a little watery and thin, and it is very drinkable. I'm sipping this, but I could put the whole thing down in one gulp.

Innis and Gunn's very first stout is a gentle, milky brew and on its own may not have been so amazing. But of course, with Innis and Gunn, they're always OAK AGED and this batch with these extremely rare oak barrels they used takes everything to a whole new level. Of the five beers of theirs I have tried, this is on the bottom of the list, only for the fact that I don't feel I don't prefer really Stouts over Ales or Beer. That being said, this company never ceases to amaze me.

Email ThisBlogThis!Share to TwitterShare to FacebookShare to Pinterest
What the... Barrel Aged, British Beer, Innis and Gunn, Stout