About: "2011 marks the 100th birthday of Mississippi Delta bluesman Robert Johnson who, according to legend, sold his soul down at the crossroads in a midnight bargain and changed music forever. Working again with our friends at Sony Legacy (yup, the same folks we did our Miles Davis-inspired Bitches Brew with), Dogfish Head pays tribute to this blues legend by gettin the hellhounds off his trail and into this finely-crafted ale.

Hellhound is a super-hoppy ale that hits 100 IBUs in the brewhouse, 10.0 ABV, 10.0 SRM in color, and dry-hopped with 100% centennial hops at a rate of 100 kilos per 100 barrel brew-length. Can you tell we at Dogfish are stoked for this mighty musical centennial? To accentuate and magnify the citrusy notes of the centennial hops (and as a shout out to Robert Johnsons mentor Blind Lemon Jefferson) we add dried lemon peel and flesh to the whirlpool." 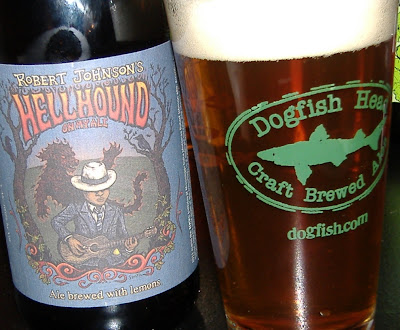 Thoughts: Hellhound poured a dark yellowish tone that produced a deep orange in the glass. The head was robust at first but faded a little quickly leaving two puddles of each side. Medium carbonation bubbles rise.

Smell is that of a total hop bomb. Very strong, and creeping and crawling, awakening the senses. It's mostly a heavy citrus sensation, a little floral, little bit of pine, but very lemony. I love lemons... so I wonder how this one will taste.

Ouch. Holy shit. Fuckin' thing bit me! Harsh alcohol flooded in, an ultra strong pepper nearly made me sneeze on the first gulp and after that faded away, the double sour erupted. After each swallow there is a fuzzy haze that just clouds around in the mouth. This is brutal. Heavy fumes engulf the breath, sinus, and face and stomach burns with fire. With all that lemon and pine my brain is just going directly to dish soap. And the fact that it even has a soapy mouth feel isn't helping. I don't know if the malts here are helping the brew out or making it worse. The taste is seemingly perfectly fine, but it's like blast beats of blinding, intense ice fog.

Aftertaste is like that generic sugary lemon candy. I got half a bottle left as I write this and there's no damn way that I'm not going to drink it all right now, but man, this one is a bit of a struggle. I love hops, strong beer and lemons. This beer is all three of those things, but it packs a gauntlet like punch that doesn't ever back down. It's there in every single sip or gulp. I'm going to let the rest warm for a while and I'll see what happens.

Wait a minute! I just poured the rest into the glass and during this I noticed, out came a huge bundle of hop flakes. It was obvious. This once near transparent beer is now, well, still transparent, but grainy as hell! Alright, so the beer has warmed and I'm starting to feel a slight buzz now. The harshness has calmed down considerably first off. Let's say it's about half as intense as it was earlier. Now I'm getting a soothing peppery flow, a slightly bittersweet flavor, heavy malt undertone and a cool lemon background. It tastes a hell of a lot better when it's warm, but this will be a one time experience for me. Thanks DFH.

One of the few beers brewed with lemon that I actually liked. I think I had 2 bottles of this beer and really dug it. Then again, I'm a bit of a hophead... 100 IBUs, count me in!