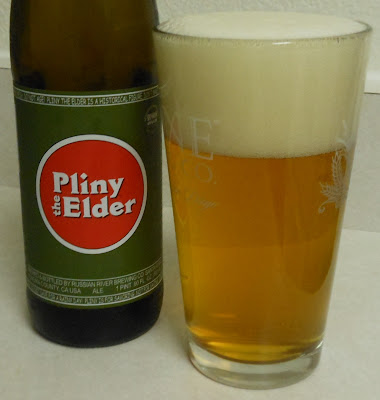 About: "Pliny the Elder is brewed with Amarillo, Centennial, CTZ, and Simcoe hops. It is well-balanced with malt, hops, and alcohol, slightly bitter with a fresh hop aroma of floral, citrus, and pine. Best enjoyed FRESH! That is why we make it in such limited supply. Actual bottling date is printed on each bottle!

Where did we come up with this name? Back in the year 2000, our friend, Vic Kralj, who owns the Bistro in Hayward, California, decided to have his first ever Double IPA festival. Vic invited 10 breweries, 6 of whom (including us) had to brew something special for him since we had nothing that would fall under this style category. Vinnie had made a Double IPA at Blind Pig in 1994, but was not brewing one at Russian River Brewing at the time. He had an idea for the recipe, but not a name. After much research in beer books, brainstorming, and deliberation, we came up with "Pliny the Elder". Pliny, the man, lived in the first century- 23 to 79 A.D. According to our brewing references, he and his contemporaries either created the botanical name or at least wrote about Lupus Salictarius, or hops, currently known as Humulus Lupulus. That was a very early reference to an important part of any Double IPA! Pliny the beer has now become one of our flagship brews!"

Pre-Thoughts: When traveling back to Cali, I had merely a few things on my mind: Find some Pliny, drink some Pliny, swim in an ocean of Pliny, ect. Of course, I had all sorts of fun shit planned and did a lot, but I made it a priority while on the way anywhere I'd sniff out those dastardly liquor stores and find liquid treasure! I was met with the same answers from every single one of the seven shops in two different counties, including BevMo!, which was along the lines of: "We don't stock that any more because we had a fight with the distributor.." and one guy even added that it was "...over refrigerated trucks." What in the fuck! There was only one massive shop called Total Wine that claimed to get shipments in, and told me to come back Friday morning. Upon my return that fateful morning, as the employees were shelving tons of bombers from various boxes, I was told that no Pliny had come in.

Later that morning while driving to the river for a fun day of drinking beer while on a speedboat, my sister called up this restaurant in the city of Sac called The Shack (Reviews: 1, 2), claiming that they've got all sorts of strange rare beer there. "She says they've got Pliny the Elder, but not the Younger." I became horribly excited, before the ultimate realization came that I could have possibly tried bottles of Elder and Younger back to back sunk in. We got to The Shack around 8PM and requested multiple bottles of Pliny. "We're all sold out." the guy tells us, all hearts drop. "No, we just got some in this morning.", a girl says. Awwww Yeahz! Turns out the dude was just so used to saying that so much it just comes natural. The Pliny bottles we got were exactly one month old, which is strange since they had "just got them in". I pondered for a moment whether we should have DRAIN POURED THEM ALL!!1, but I was far too deep in once I caught a whiff. 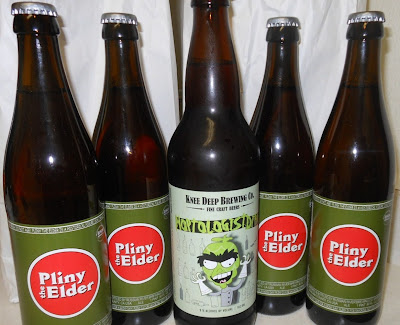 Thoughts: Pliny poured a light yellowish-gold and had a fluffy-topped, rapidly growing and very bubbly slightly off-white head. There's a fair amount of graininess to it, causing a slight haze.

It smells pretty damn good! Spicy with a sweet candy quality to it, and a hint of zesty lemony bitterness. It reminds me a little bit of the ocean: cold and misty. There's a resiny pine, and that hint of grapefruit... and it's got a crackling presence to it, as if every time I smell it something bursts open.

That first gulp was madness... madness I say! But seriously, the taste is soothingly sweet at first with popping hops that hit from beginning to end. After the swallow there's a bittersweet, almost buttery sensation. It reminds me of natural honey, but with a strong edge to it. There's a sharp bitter finish and it's peppery on the throat which is attacking, and pretty fierce. But it's got a very nice balance to it and honestly, I was expecting it to be way more hop dominant than it is. While the hops give off the flavor and scent initially, the malts blend instantly upon the taste, and never does any one factor of the brew outshine the others.

Mouth is a medium. It's a bit frothy at first, but smooth and creamy, and goes down super fucking easy so it's really filling. If water tasted this good I'd probably be a waterholic, and not what I am today... I can see why so many people like this, as there really are no negative aspects about the beer. It tastes good, smells good and makes you feel good. There's no bad aftertaste to it and it finishes quite nicely. I had my first three Plinys with my dinner from The Shack, which was a massive Cajun Blue Cheese Burger, extra pickles and I skipped most of the fries on the principle of fuck fries. Needless to say, that meal was the bomb.

Whether or not this is the best beer in California, is up for debate, but the real fact about this beer is that it's ultimately a quality product. It's surprisingly balanced and tastes awesome right to the last drop. Is it the best IPA I've ever had? I don't think so. Is it in the top 5? Well, I haven't actually made a list and there's still a lot more out there for me to try. Ballast Point's Sculpin and Alchemist's Heady Topper for instance, which I can't seem to find anywhere. But when it comes to IPA's, there really hasn't been a middle ground for my personal tastes. Either I really fucking like it, or it's been a horrible letdown. When I think of quality American IPA's I think of Southern Tier's Gemini, or Wachusett's Larry, Sierra Nevada's Torpedo, Hoptimum and Celebration. Pliny the Elder fits right in with the rest of the best.

Glad to hear that it lives up to the hype, kinda. I found a site that sells Pliny online, craftbeerconnect.com, but of course they're sold out currently. Not to mention it's in their highest price tier. I'd love to try it, along with some other Russian River brews, but I've about had it with all the ultra-rare limited beers that you have to trade your right nut to get. There are plenty of great beers available all year round, and limited beers that you can actually get. I'll stick with those.