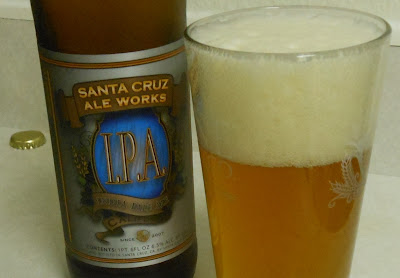 About: "Another excellent example of how brewers out West can manipulate hops. Originally designed by the British, this style was made with more hops and alcohol in order to survive the long traveling ships from Great Britain to India, at the time a new English Colony. This lightly colored ale is very aggressively hopped from start to finish. From the first sip the hop bitterness and aroma are overwhelming then rounds off nicely with a citrus finish. Including dry-hopping we use over 30 lbs. per batch (2 lbs. per bbl)."

Thoughts: This beer's got a hazy, lemony yellow color and bursted with a quick building and long lasting fluffy white head.

The scent... is pretty dank. It's extremely floral, there's a slight citrus tone, and it's got a heavy, pungent odor.

First gulp, and I get bitter, crackling hops. It's zesty, lemony, and quite a bit funky. After a while a flowery and grassy mix of fuzz coasts the back of the tongue. It's got a hint of sweetness, but it's clouded by a bitter and earthy taste. Too strong of yeast perhaps? It's not the most pleasant tasting beer, but I can tolerate it.

Medium and feels like a solid brew. Not too thick and not really watery at all.

This beer is way too flowery and acrimonious (O_o) for me. It's not horrible or rancid or anything, a bit gamy rather, but I'm not digging it enough for a 22 oz. Though I'll finish the bomber, a 12 oz would have been enough for a one time try. I could see if this beer was incredible, that they may be a little secretive about how they brew it... but it wasn't really all that good, so what's with the lack of info? Does dry hopping = "manipulating" hops? Is that what they call it out west? Innovative stuff. 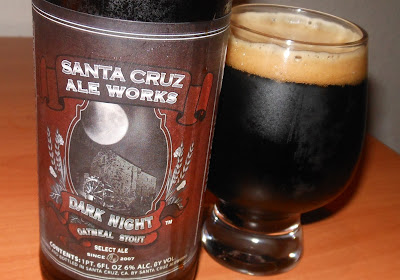 About: This beer isn't even listed on their website, and also, I don't have the bottle any longer so I cannot write what was on the label (and I don't recall there being much).

Thougths: Poured a pitch black hue with a light tan head that faded into a few strange looking puddles that resembled the shape of sea-horses.

It smells pretty good, like a standard stout actually. It's got a rich, hearty aura to it though I'm not really getting much oatmeal... only coffee.

The taste is bitter coffee and grass for the most part. Oatmeal is severely lagging behind, and there really isn't much else. And for some reason it seems really watered down or something. Huh, it's not that interesting at all, just kinda there. Meh!

Mouth feel is watery, thin, lacking... it leaves no trail. Well, aside from some grass on the back of the tongue.

This isn't rich or indulgent enough for me. It's actually pretty bland. Damn shame. This is a pretty weak beer on it's own, but when I think back to Wolaver's Oatmeal Stout this one becomes downright horrendous compared.

Wow, a bad West Coast IPA? I didn't know such a thing existed. Considering this brew only has a 76 rating on Beer Advocate, I imagine it's amongst the worst Calli IPAs. I guess they're trying to keep their hop profile a secret, but clearly they threw in some funky hops for dry hopping if it has a dank, pungent odor. There's nothing wrong with dankness, but it doesn't go well with very floral hops in my opinion. I prefer dank and piney, or peppery, hop combos.