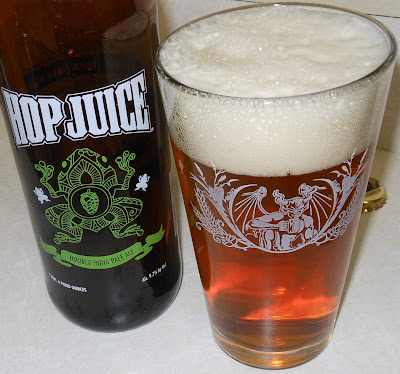 About: "At Left Coast Brewing Co. we pride ourselves on being one of the pioneers of Double IPA style craft beer. This hop monster uses Premium American 2-Row and a touch of light crystal malt to create a solid malt foundation. Five different Hop Varieties are used in the Hop Juice. It spends two weeks dry hopping in fermenter contributing to its great hop aroma. Starts out sweet and finishes with the crisp bitterness of a Double IPA. This drinkable blend will have you HOPPING till nights end.

Thoughts: Hop Juice is a very clear, clean, transparent gold with a slight yellowish tint. The (also slightly yellow) off-white head started off very bubbly and a little bit fizzy, then after a while turned into a foamy glop.

The scent is absolutely beautiful. Hops are bursting all over the place! It's very strong, yet sweet smelling... and there's a resiny attribute about it that gets suck in the nose.

Taste is of heavy handed hops blended nicely with sweet malts. There's a rush of alcohol initially, followed by a blasting bitterness. It gets a little grassy on the back of the tongue, and but at the same time a floral type thing begins to happen. After starting out sweet in both the scent and taste, the massive bitterness that hit and mixed in with it shortly afterwards was very welcome.

Mouth is medium and very coating, kinda like syrup.

While this is pretty intense and bitter, it's still well balanced by a simple yet sweet malt base, making it relatively drinkable. This beer is strong in all its areas, but neither of its three major features squash the others like a car squishing a frog crossing the road. It's pretty damn good and I'd say slightly above average. Not to mention it's got a really cool logo. Gotta love frogs. 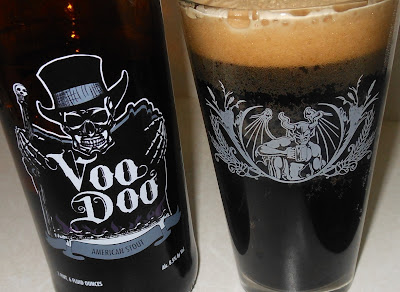 About: "VooDoo is a full bodied, dark brew that is rich and malty with plenty of roasted barley character. This hearty stout is layered with flavors of roasted barley, chocolate, and coffee coming from the highest quality imported malts. Its creamy long lasting head completes the brew, tempting your taste buds to be spellbound.

Thoughts: Poured a dark chocolatey brown out of the bottle that formed into a pitch black darkness. Several bubble clusters cling to the side of the glass, and a small slowly depleting multicolored tan head dissolved into puddles.

Smell is malty. More choclate than coffee, not overwhelmingly rich, nor is it underwhelming. It's a bit roasty and pleasant.

The taste is charred, but not burnt roastedness and is more coffee than chocolate... yet, it's still quite delightful. It's rich tasting, though mild. Very mild actually, but flavorful at the same time. It's never muted, bland or drops off. Not too sweet, not too bitter, tasty and just interesting enough that it's good, although not great. The hop presence seems pretty low.

A good stout overall, but nothing remarkable. It's very easy drinking as there are no heavy grassy or funky notes. There's a slight haze on the back of the tongue it's not ill tasting at all. This could be a hell of a lot worse, and it could also be a lot better. But it's got a good enough ABV and some really cool artwork, so yeah...

Clever logo for a "hoppy" beer. I've never had any Left Coast beers, not even sure I've seen any out here on the East Coast. Definitely sounds like my kind of beer.

I dig the Stone glass too. I have one, but the design isn't as nice. Gotta love that arrogant bastard.