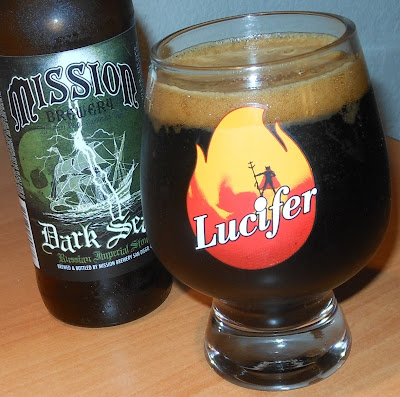 About: "The ancient legends that abound the Russian Imperial Stout of yore are filled with tempestuous romance, sinful thievery, and scurvy, too. So highly regarded was this historic recipe, the Russian Kings tried to keep it all to themselves. They failed. Today we bring you our own dastardly dark version, with a rich and roasty aroma, notes of plum and port and a velvety texture so luscious it just might make a grown man weep."

Thoughts: I don't think this one gets around much.

Dark Seas poured a pitch black with a brown-sugar colored head with tons of small bubbles rising up in straight lines around the edge of the glass.

The scent is pretty mild in its tone, which surprised me quite a bit after I got a look at this one. There's a sweetness to it, coffee and a little bit of dark malts flowing.

Starts off with bitter coffee, then and intense sweetness rushes in and takes over before slowly falling back and allowing some gentle grassy tones to come through. There's a slight haze of alcohol after each gulp that slowly intensifies once it's inside of you. After drinking about half the bottle, the bitter and the sweet have blended in together and it all tastes pretty decent. As it warms, a little bit of the hop presence shows itself more clearly... as well as the those boozy fumes.

Mouth is smooth and creamy. Doesn't really linger all too much and the finish is pretty clean.

This one is kind of simple, but it's still a good Russian Imperial Stout. It doesn't leave much of an aftertaste or fuzz on the back of the tongue. That's both good and bad for me. For one thing, I'd like a lingering aftertaste if it were awesome tasting, but grassy fuzz on the back of the tongue I could do without. This one has neither of those, it just kinda disappeared into the night. Tasted OK while it lasted though. 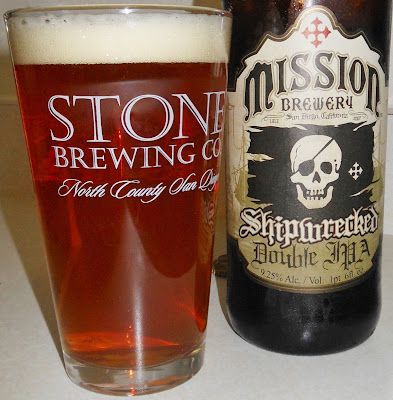 About: "San Diego Style Double India Pale Ale. A style of beer curiously born on the foggy shores of Father Junipero Serra’s first founding mission. Our own vigorous entry is one rebellious IPA, quick on the trigger, and brimming with a bounty of hop ingenuity. This is a big, bold, brazen beer, a restless vision of a new America. Hops: Cascade, Magnum, Centennial and CTZ."

Thoughts: Poured a golden, near-orange hue with a small cream colored bubbly head that got clumpy after a short while. There's moderate carbonation and it's only slightly hazy.

Very fresh smelling and boisterous (second word to come to  my mind). Hops come bursthing through at first then slowly drift away as a low flow of sweet malt creeps in.

First impression is a very sweet and peppery flavor. Quite good. The beer is rich and spicy, and incredibly sweet. I'm hardly getting even more than a hint of bitterness or bite, even after the third gulp. Just sneezed. The hops start to blend in a little too well after a while and hide out. It's still got an overall hop feel in the taste, but the flavor weans in another direction. I don't want to say barleywine, I'd rather just say utterly sweet Double IPA.

Mouth is little frothy, quite oily and a little on the medium to thin side. It feels a bit thin while drinking it, while the aftermath is slick and sticks around iniside the mouth.

This one is very malty of a DIPA, especially when it warms, but when cold, more of the hop presence is there. Still, it's pretty well balanced and it is void of any unpleasantness. A splendid brew all in all, but not incredibly remarkable by any means. It starts and finishes in different places, so I guess it's at least interesting. Perhaps I expected more from a beer with a Pirate Flag on the label...
Laid to Unrest by DrunkethWizerd

Cool label and cool name. Sounds like a good beer. If I saw it, I'd try it. But that glass is clearly the start of this review. I hope you acquired that glass for your collection. It suits you perfectly.

Dude I got that glass for 2 bucks! The liquor store a few blocks from my old house had tons of unused and dusty glassware from all over the world, all ranging from 1 to 5 bucks. I couldn't fuckin' believe it. That kind of thing never happens where I'm at now. Anytime I find something like that here it's either "not for sale" or ten bucks plus. Suuure. I would have gotten a few more cups more if I didn't need to travel. But yeah, that one was screaming my name...

That's pretty awesome. I'm sure that glass will server you many a fine brew.