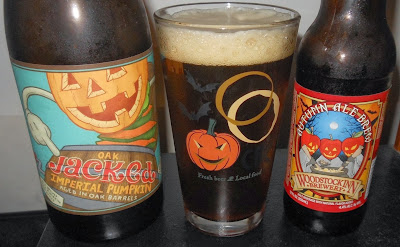 WHAT'S GOIN' ON: Happy Halloween... Motherfuckers! It's that time of year again. Aw yeah. Time to poison small children Oh wayt, I mean fuck hot bitches no, that can wait too, uhh... fuck hot poisoned small children's bitches?! Combining those two things doesn't really come out right. I've been watching too much Epic Beer Time. But wait!, what's this!? I'm posting another beer review! (how exciting) and on Halloween!? Well, pathetic as it is... I'd carve a piece of my heart out tonight, if I had any of it left.

No matter the case though and drunken ramblings aside, tonight I'm doing a little self poisoning of my own by mixing these two incredibly delicious toxins: JACKED, and Oak Aged Imperial Pumpkin Ale that clocks in at 10.31% ABV (Get it?), with quite possibly the best tasting beer you'll ever find under 5% (this one is a 4.4%): Autumn Ale Brew! Looks like I'm in for one hell of a tricked out treat tonight.

HOW IT WENT DOWN: Me poured about a third from each bottle into this pint glass here. Head faded rather quickly, but left some bubbly puddles here and there.

While the colors for both beers are similar, this maintained more of the Jacked attributes with its darkness and gloom. It's a dark and cloudy reddish orange with light carbonation.

The Autumn Ale Brew brings the apple cinnamon pastry to this pumpkin party and now this mix smells exactly like Pumpkin Pie. It's marvelous! The wood and heavy booze from the Jacked is a bit subdued, but this concoction is no doubt ten times sweeter smelling than the two of these awesome beers alone.

The taste is, and there's no other way to describe this, just pure unadulterated bliss. It's instant gratification in liquid form! You get all that cinnamon, candy apples, pumpkin pie, sweet and sour, and a gentle fade out. This mix is probably one of the sweetest and most flavorful brews I've ever had, for such a gentle ride. The booze from that Jacked bottle really hides out here, I can't even get a hint of it. This spiced ale mix is the stuff that this season is made of.

Mouth is light to medium, a little watery, tingling, sticky, and fiery.

Due to the oak aging in the Jacked, mixed with the low ABV of the Autumn Ale Brew, this one does fade a bit fast and leaves a watery and wood toned aftertaste. The cinnamon lingers the most, but it was all great while it lasted.

Email ThisBlogThis!Share to TwitterShare to FacebookShare to Pinterest
What the... Mixing Beers, Pumpkin Beer, Uinta