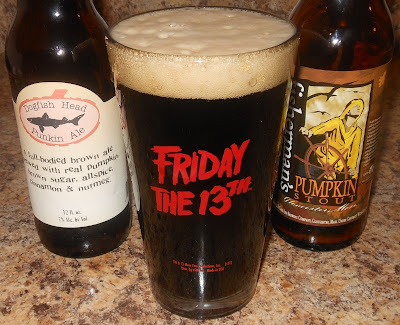 WHAT'S GOIN' ON: DFH Punkin Ale has a lot of hardcore fans, it's a fact. Personally, I think they (Dogfish Head) make a lot of other beers that are far superior to this seasonal. I still enjoy a few bottles whenever it comes around, but it's by no means a holy grail of pumpkin ales. I've tried Fisherman's Imperial Pumpkin Stout last year and it was a pretty cool experience. How their "regular" version of this brew holds up, I do not know... and I probably won't know, since I'm mixing it with the Punkin for my first try. Oh well. Both of these brews clock in at a respectable 7% ABV, and are regulars this time of year for languishing on the singles shelf. So why the hell not? 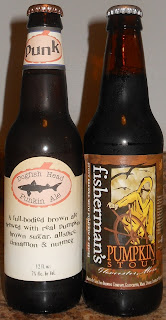 HOW IT WENT DOWN: I couldn't stop smelling that Punkin once I popped the cap off the bottle. It's wondrous. I stood there with my nose in the bottle for about a minute straight. The Fisherman's Pumpkin Stout smells pretty good too... you definitely get that pumpkin, but there's a half and half with a coffee scent.

These two beers have quite a similar density as the stout just creeped right in and blended with the brown ale. The final result is a pretty deep brown, but while dark in tone, it's still a really clear beer mix. A lot clearer than I thought it would be actually. Head was minimal, though I poured carefully and had a few issues.

Well, that coffee comes through first, dominating the scent. It pretty much drowns out the spices from the other beer, and in itself for a while. There's a pumpkin mash in the background, and the spices have all but been subdued. It smells a little bit like Dr. Pepper now. Weird.

Taste is very smokey. Minimal bite. There's a gentle bitterness, and a toasty, roasted note throughout the whole thing. It's not terribly exciting. The smokiness from the cloves and that roasted coffee are really battling it out here, and neither one is winning. It's a stalemate. And speaking of stale, well, quite frankly this all tastes a bit like day old coffee with a shot of cough syrup in it. It's mildly spicy, but that shit fades instantly!

Mouth is a bit thin, and slightly frothy. It's also flat feeling too, which is weird since both bottles pretty much exploded when I opened them up. Must have let out all the carbonation. Huh.

This one is going to get a great big MEH! from me. I'm not the biggest fan of coffee flavored stouts to begin with, especially the weaker versions, and also brown ales aren't really my thing. So perhaps I'm getting the worst of both worlds here. It just tastes rather bland. Heavy clove, stale coffee, extremely mild cinnamon and a touch of sour pumpkin flesh. Consider this Experiment, failed. At least the DFH Punkin smelled really good.