WHAT'S GOIN' ON?: I can hear Foley's manic screams of "He's Hardcore!" blaring through my skull, as I prepare to down a Thirty-Four fluid ounce mix of two of the most intense beers in the world! Southern Tier's Pumking, no doubt the most infamous pumpkin beer ever known to man or beast, is a potent and magical elixir easily capable of capturing the more than willing offered souls of the not-so-innocent. But what happens to the Autumn Solstice when the frost of an early three-year-old winter comes flooding in from forgotten times and blackens all of the gold, yellow and orange leaves!? Dogfish Head's World Wide Stout, an extremely powerful medicine, is here with some dark forces of its own to figure these things out. Best to never forget the past. 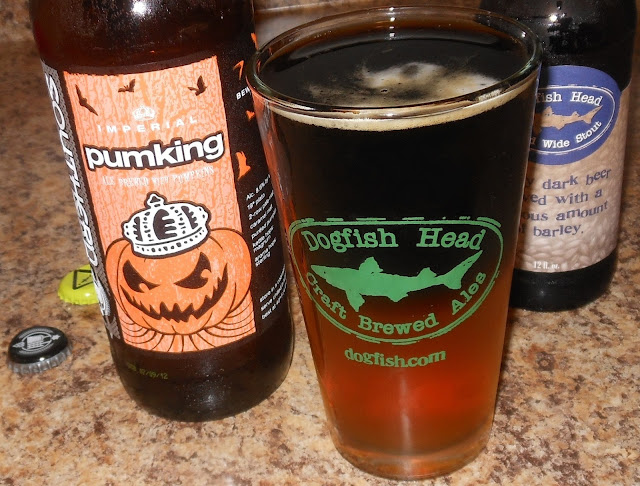 HOW IT WENT DOWN: First of all, just smelling the Pumking as I poured half a glass of it was a fucking treat in itself! Man, does this really bring back the good times. And after pouring the World Wide Stout and smelling it, all I could muster up was a thought of "Uh-oh." Remember what happened last time you went to the pub, came home and busted out the WWS Drunketh? Yeh, I said hello to my good friend side of table and his buddy floor.

This black and tan, my very first actually, looks pretty damn incredible. I like the whole concept of it... it's visually interesting, fun to do and hell, a while back I got a few free 'Bass Black and Tan' pouring tools that fit right over a 16 oz glass. Been aching to use it, but I knew what I was saving it for... for This! I poured it like a total black and tan virgin too. All worried n' shit. Ha. It feels exciting to do something for the first time, and it's been a while...

The logistics of Black and Tan elude me of course, as one brew rests atop the other so I'm not exactly getting a real "mix", so what the hell... I think I'll just stir the fucker up! Alright, stirring it turned it a pitch black and gave it a sliver of a dark khaki head. The scent, if magnificent!! Loads of brown sugar, molasses, gingerbread cookies, and some dark fruity booze.

Took the first gulp, and yes, we have a winner. These two beers blend perfectly. There's the usual harsh boozyness from the WWS that's gently calmed by the Pumking, and at the same time that booze from the WWS subdues the spices from Pumking ever so slightly. It's pretty amazing how well these two fit in together. It's really syrupy sweet, and a bit grainy as well. Heavy hitting, but the harshness is brought to an "appropriate" level and overall it's just a pretty damn exciting mix of poisons.

For some reason it starts to smell like maple syrup after a while, especially when it warms and that WWS takes over. Not that I mind though. Pumpkin pie drizzled with maple syrup? I don't do it everyday. All out of WWS now, and I gotta say that I've really been wanting Pumpkin all year long! I'm really pleased that I chose these two to get things going for the Autumn months or whatever. I wanted to make it speshull for my popping my b and t cherry, and I think I did it. Shit was off the fucking hook. 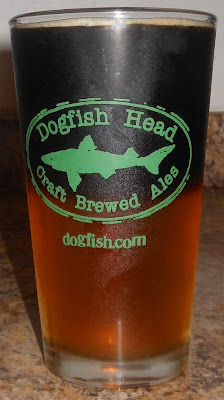 That has got to be the most amazing black and tan of all time. Incredible! I haven't purchased a bottle of Pumking yet this year. Is it as good as last year's batch. I gotta say that last year's was the best I've ever had. Drank a leftover bottle a couple of weeks ago and it was indeed magical. It really tasted like pumpkin pie in a glass. Mmmmm. I should probably go buy some bottles.

I've been thinking about your black and tan and came up with another combo that I think will be a wonderful Fall treat... SN/DFH Life & Limb with DFH Punkin. I gotta grab a bottle of Life & Limb from storage, but will report back on how it comes out.

Had this on tap a few nights ago. Quite good if I do say so myself.