About: "Brewed especially for the season, this bright citrusy unfiltered lager is both satisfying and refreshing. It’s the perfect transition from winter’s heavier brews to the lighter beers of summer. This hazy golden brew is brewed with only pale malts (Two-row Harrington, Metcalfe, and Copeland) for a crisp maltiness and honey malt for a slight sweetness. The beer is brewed with 100% Tettnang Tettnanger Noble hops (from original hop gardens in the foothills of the Alps), a half pound per barrel, to produce a unique, bright orange-citrusy aroma and taste of orange blossom honey." 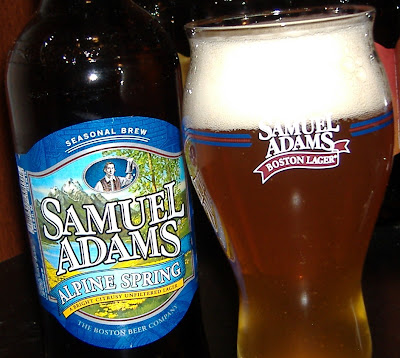 Thoughts: Poured a very light yellow. Nice puffy white head that stuck around for a while. Somewhat transparent with a lot of carbonation bubbles rising up.

Well this smells pretty good and not light at all (a concern of mine among Sam Adams beers, scent and taste-wise). Major citrus, honey, wheat and floral notes for the most part. Nice mix of hops and malt present, with the hops really standing out in the scent.

It's got a very nice mix of the hops and malts. They obviously made a nice choice with what they've used here, and by the looks of things, it was really simplistic. It really comes together quite well and leaves a distinct flow. Those blistering cold hops hit first and then slowly fall back while the pale and honey malts rise. The hops never fully retreat though, and their taste lingers throughout the entirety of the brew. It gets a little musty after a while. A bit like lemon rind and grapefruit, but not sour at all... pretty sweet actually. Like edible flowers. I've got issues with balance when it comes to beer. I tend to lean towards the extreme and prefer dominance in certain areas depending on the style and ABV. Perhaps it's because quite a few balanced beers I have tried simply seemed bland. This one however, is not one of those. Maybe it's the one-two punch of pure ecstasy that this beer delivers, but I couldn't stop thinking about it for the next few days.

Mouth feel is a light medium and very drinkable. Very good for a sipping beer as well, ladies.

This is pretty crisp and a little bit grassy, but a sweeter grassy. Very flowery. Like running through a grassy field full of wildflowers while burping up pale ale. I really enjoyed this beer and picked up another bottle after work to do some non-review drinking. This is an astonishing release by a company that I haven't had the best track record with, and I can see why it's a seasonal. Why spoil your customers with the good shit! Huh? The price is just right for a 22 oz. as well.

Email ThisBlogThis!Share to TwitterShare to FacebookShare to Pinterest
What the... Helles, Lager, Massachusetts Beer, Samuel Adams

Tried this on tap over the weekend and it was pretty terrible. Honestly I think either the keg or lines were contaminated because it tasted pretty damn wheaty. It was also cloudy as hell, which threw me off. I can see from your pic that it's not clear, but not nearly as cloudy as what I was served. I may have to pick up a bottle to try a "clean" glass.

My first guess would be the lines, but I say just buy a three dollar bottle and let me know what you think then. Mine wasn't cloudy "as hell", but it's got an unfiltered haze to it. I got a fair amount of wheat in mine, but it was mostly citrus hops and honey.