About: "We recently brewed a beer called Baird / Ishii / Stone Japanese Green Tea IPA as a benefit for Japanese tsunami relief. We created this very special IPA, brewed with 100% Maris Otter Malt and Belgian Candi Sugar. Once we decided to tie it all together with the addition of Japanese Sencha Green Tea in a dry-hop, the rest of the recipe came together easily. We included hops that we believe would blend well with the tea flavors, and we went non-traditional, at least in the sense of American IPAs. After bittering with Warrior hops, we used Crystal and New Zealand Pacifica for flavor. And then for the first dry hop, we again used Crystal and Pacifica, and added a brand new hop variety, Aramis, from the Alsace region of France. Then we went all Japanese for the 2nd dry-hop, with Sorachi Ace whole lead hops and the Sencha Tea." 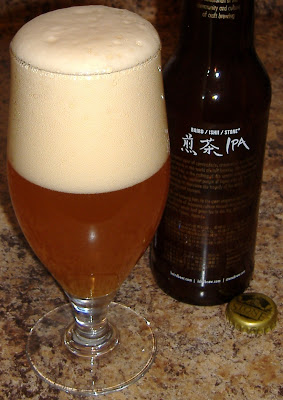 Thoughts: A pretty interesting looking beer, even before it comes out of the bottle. Very orange look to it and there's an absolute ton of sediment lingering on the bottom in there. Green tea leaves as well perhaps? Don't know yet. Let's take a look. Well, I poured it all in there! It poured a very off-orange, burnt amber mix with a tinted almost orange toned off-white head. Perhaps due to my violent half pour it took up half of the glass. It took about four minutes for it to die down before I could do about three or so more mini pours and get it all in there. Even then the half finger head that remained didn't seem to want to fade at all. As I pick up the glass and hold it in front of this white screen, I can see what appears to be about a million or so particles floating within the brew. Some of them are falling towards the bottom of the glass, but most are suspended in the murky dusk.

It smells pretty damn good, and interesting to say the least. That strong IPA nose gets out there first, tickle to the nostrils, and then there's a bit of faded green tea laying around in the back. It's citrusy, and the longer it's breathed in, the colder and more ferocious those hops become.

Time to taste this sucker. Sweet and sour sauce. It goes through little phases while holding it in the mouth. Wow. That taste after swallowing is crazy, like mandarin oranges and lemon peel. There's a bit of a hazy froth that suddenly spikes like a fresh burst of honey glaze. The fallback of the green tea blends excellently amongst the fuzzy alcohol fumes.

This beer is pretty thick, and a little bit heavy, but it tastes sweet and has no unpleasant occurrences.

Mmmm... yeasty! This fruity, strong and medicinal brew is not only quite enjoyable, but also apparently went to a good cause. "A wonderful spirit of camaraderie, cooperation and mutual support exists in the world of craft brewing. We have harnessed this spirit fully in the crafting of this special collaborative brew dedicated to the resilient people of Japan who are bravely endeavoring to overcome the tragedy of the March 11, 2011 earthquake and tsunami." Go buy a bottle and enjoy it with some ramen. Trust me on the beer and ramen mix, I'm an expert on this sort of thing.

I saw this beer last year at the same time Stone released their Cherry Chocolate Stout with Troegs and JF&KS. I passed on the Green Tea IPA, foolishly, in favor of a few bottles of the Stout. I do that sometimes with beer, depending on what my taste is at the moment instead of thinking ahead. I'm going to hit up the beer store this week, and I'll look for a bottle of the Green Tea.