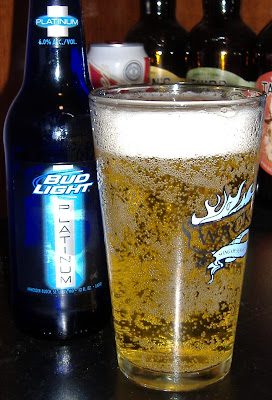 About: "Bud Light, the world’s best-selling beer, will add to its portfolio when the brand debuts Bud Light Platinum in early 2012. With a slightly sweeter taste, higher alcohol by volume (6%) and signature cobalt blue glass bottle, Bud Light Platinum provides beer drinkers an upscale light beer option as a companion to their social agenda. There are opportunities for light beer to expand into new occasions, and we think Bud Light Platinum is the beer to take us there,” said Mike Sundet, senior director, Bud Light. “Bud Light’s ability to innovate and its social personality makes it the ideal brand to introduce Bud Light Platinum to a growing number of image-conscious beer drinkers.”
Thoughts: Poured a near clear slightly straw yellow. I think this may be the most transparent and clearest beer I've ever seen. The opaque white head vivaciously bubbled itself down to nothing (just like a soda, only a little slower) in a twenty second span. Carbonation bubbles are rising like mad and clinging all over the glass.
Scent is stronger than I had expected at first. Mostly of rice. Smells like a standard American beer that's not heavy in any major areas.
Hint of spice. It's a little bit sweet and that's about it. Hidden alcohol. It kicks Bud Light's ass that's for sure.
This went down like water. I took a few sips just for the review, then downed it in two small gulps. It's not as full or tasty as regular bud, but it's not supposed to be. While drinking regular Bud Light from a can at a party a while back, I found it to be a complete chore and I hated every second of it. I can't stand the stuff. This is a better alternative, although with the gimmick of the cobalt Blue Bottle only currently in 12oz, we'll see what happens. For a Light Malt Liquor this really should stop pretending to be upscale and just get into a 40oz already.
Overall, this beer tastes just way too similar to AB's other beers. It's like a mix of Natural Light, Natty Daddy, Bud Ice and Bud Light. And I think they even made Bud Ice Light at one point but I never tried that. Is this perhaps a reworking of that beer (which was discontinued in 2010)? New bottle, different angle. The 6.0% ABV is quite welcome for something that you can chug like nothin', but I think I'll stick with Natty Daddy for my chasers.

Email ThisBlogThis!Share to TwitterShare to FacebookShare to Pinterest
What the... Anheuser Busch, Beer, Lager, Malt Liquor

It's great that you reviewed this beer, man. I've been joking about it since I first heard about it, but haven't had the chance to try it yet. Bud Light is terrible, and I'm not a Bud fan in general, but this beer just sounded too damn funny. The whole upscale, craft beer, taste angle that they're going for is hilarious. Honestly, a sweet, high ABV, light and cheap beer isn't for classy folks at clubs or lounges... it's for kids who want to get blackout drunk.

I once had the honour to drink a regular Bud and as far as I remember, it tasted pretty good.

Nevertheless, I prefer me some good ol' Austrian beer like Puntigamer or Gösser :)