About: "Samuel Adams Imperial Stout was brewed with seven different varieties of malted barley, each delivering its own unique flavor for the beer.  But this beer is not a “malt bomb”. It is balanced by 50 BUs of East Kent Goldings hops that have a clean earthy aroma and pleasant bitterness. This is a colossal beer that should be savored and enjoyed. Malt Varieties: Two-row Harrington, Metcalfe and Copeland pale malts, Caramel 60, Munich, Special B, Smoked Malted Barley, Roasted Unmalted Barley, and Malted Wheat / Hop Variety: East Kent Goldings / Yeast Strain: Samuel Adams ale yeast." 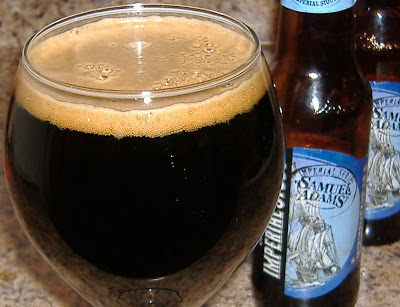 Thoughts: Poured a pitch black with a slow to form chocolate colored head that lasted just over a minute before darkening around the corners and leaving a puddle of large bubbles and foam in the middle and around the rim.

Alcohol heat is the first thing that hits me as I lean in. It creeps up the nose and tickles with a tingling sensation. It smells strong. Cafe Mocha scent all around, and a hint of sugary sweetness.

Bitter coffee grounds. Fruityness. High alcohol. After swallowing and the tastes start to fade it's like the smell of grinding coffee beans or walking through the coffee isle at the supermarket. Malty, chocolatey, and it gets a lot sweeter as it warms. The bitter coffee grounds flavor fades as it warms and you drink it, leaving an alcohol haze with a little bit more of that fruity chocolate. It's a little bit grassy and tart which is a nice offset to the malt of the drink. It's a bit of a cloudy haze of booze, and good for a totally-not "malt bomb" of a brew.

Frothy and thick. Little bit sour at first, but that fades.

This is an OK stout. It's not funky or unpleasant. In fact, it tastes quite nice, for a total malt bomb! I'm highly grateful for the heavy alcohol content presenting itself here. It seems a little light though in other areas, like it's just lacking a little bit somehow. I wouldn't go as far as to say that it's boring, but it's a bit repetitive. You know, for a tasty brew. Not exactly a one-note brew, but it falls flat on its ass. Thumbs up for the booze though.

Email ThisBlogThis!Share to TwitterShare to FacebookShare to Pinterest
What the... Imperial Stout, Massachusetts Beer, Samuel Adams

I haven't had this beer in a long time, but I think it was my first Imperial Stout. Or at least the first one I can remember. I recall liking it a great deal back then, but I've had plenty a strong stout since. I many have to take this for a spin again soon... along with Sam's Imperial White.