About: "Dark, Fierce and Blustery. Across the cold and brackish waters of the Baltic, the English porter was transformed, from a mild ale to a dark and complex later that confounds definition. Immersed in dark, roasted malts and a bold citrus hop character, these big and contrasting flavors are brought together with the smoothness of a lager for a brew that's bold, mysterious and full of flavor." 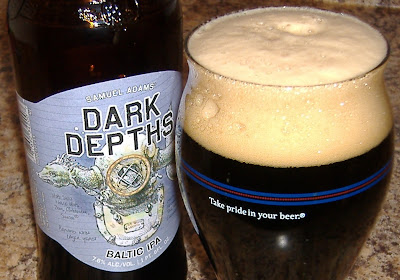 Thoughts: Poured a very dark raspberry color that I've never seen before in a beer, and it was pretty cool. The head was thick and foamy right from the build, with a cream color and around the edges, a bit of light brown and a yellowish tint. Very strange and interesting look to this beer.

This smells pretty damn good. It's cold, heavy and tangy. It's mainly a tingly citrus attack, and it's a bit sweet.

Starts off with a instant sweetness and then suddenly an ultra bitterness rushes in, attacking facial nerves. There's a peppery alcohol fume after the swallow, and an almost unnoticeable caramel background once that fades.

Mouth is a medium, very bubbly... yet easily swallowed and leaves a clean trace.

I liked the initial smell of this beer more than the taste. I let it warm and the malts start to come through a lot more, not that the hops were standout or anything when it was cold. It tastes a bit soapy to me though. I've read reviews where people describe a soapy taste, but I've only experienced that one other time (with Dogfish Head Hellhound - Review on the way). That was a bit of a dish soap taste though, and this one is more like a bar soap like Dove. I don't know if I would say that it tastes "better" once it warms, but the taste is more obvious.

Sadly, I'm not really a fan of these two new brews that Sam Adams put out. The tastes of both are well, unique, but they didn't make me happy so I'm leaving them for other beers. It would have been cool if they had four new Batch 1's instead of just two and Batch 2's of Griffin's Bow and Tasman Red... but those two were the best of all six of these so I can see why. It still should have been four new ones this time, and then 2n'd Batches of the other two. Meh.

Saw this at the store but passed since I wasn't all that thrilled with the beers from the first round that I tried. I'm sad to say, but I think Sam Adams needs to slow down on these new beers and start producing the tried and true more often. They brew plenty of good beers, but often reserve them for seasonal releases. I'd rather have more of those good rarities available than these average new brews. But whatever, it's not like there aren't a thousand other breweries to choose from.