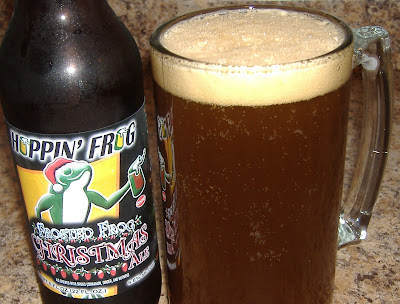 About: "The essence of Christmas is captured in this very bottle you are holding. Perfectly blended spices compliment Frosted Frog’s rich malt flavors, creating the ultimate Christmas experience. Celebrate the holidays as you savor this very special seasonal offering."

Fuck yeah! This is what I'm talking about. Smells just like fresh baked cinnamon rolls! And it's strong too. Man... after the previous Christmas brew disappointments, just the smell of this one alone beats the others straight out. I love it. Bread, sugar cookies, and pumpkin pie!

Malty with a hefty dose of cinnamon, nutmeg and a little bit of ginger. This tastes fuckin' excellent! There's a truckload worth of holiday spice in this, sweet brown sugar, a beautiful tinge of alcohol that circles around towards the end. It's got a great balance with the spice and malts, and it gets straight to the point. There's no subtle tones hiding around in this one for the connoisseurs... it's a straight up frosted mug blast over the dome of pure, unadulterated flavor! If you love pumpkin beers, you will no doubt love this! This beer kicks the ass of all other so-called Holiday brews. All Hail!

Medium thickness that you just want to savor and enjoy. Goes down relatively smoothly, but leaves a bit of a tickle on the tongue. Not that I mind it though, it's making me giddy.

Damn, I wish I could try their Barrel Aged version of this (though apparently it was only brewed once). I think this one tops their Double Pumpkin brew, which I too loved. Aftertaste is bready, malty and mild. The overwhelmingly awesome spice doesn't linger around once it's gone (cinnamon has this effect which can be distracting), instead, it lays low and blends in making it a very, very enjoyable feeling. Nothing is ever going to top this brew as a Christmas seasonal. Nothing!