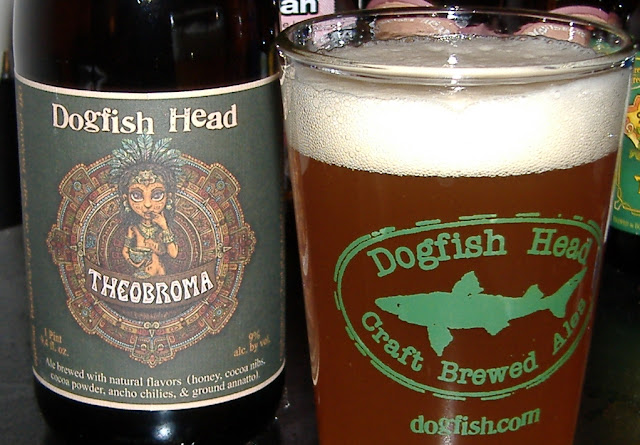 About: "This beer is based on chemical analysis of pottery fragments found in Honduras which revealed the earliest known alcoholic chocolate drink used by early civilizations to toast special occasions. The discovery of this beverage pushed back the earliest use of cocoa for human consumption more than 500 years to 1200 BC. As per the analysis, Dogfish Heads Theobroma (translated into 'food of the gods') is brewed with Aztec cocoa powder and cocoa nibs (from our friends at Askinosie Chocolate), honey, chilies, and annatto (fragrant tree seeds)."

Thoughts: Picked myself up this special treat. My fourth of the Dogfish Head Ancient Ales series. I read about this in an old Draft magazine interview before it was actually made, so I've been wanting to try it.

Theobroma poured a lot lighter than I thought it would be. A real hazy dark yellow with shades of orange, and a head that was incredibly slow to form and apparently had somewhere to go real quick. There's a little foamy island left in the corner of this brew, and I'm seeing incredibly light carbonation.

Smells heavily of cocoa and a little bit like a mocha. Very subtle fruity hop tones laying low. Overall very sweet smelling with a little bit of the spicy.

There's a swirling of tastes that comes off rather immediately. I get that honey, and the fallback from the ancho chilies, hops that flow in and out and the cocoa is coating. A fruity tingling slowly rumbles its way into the mouth and gives off a strong tinge, causing a slight pucker.

...Alright, let it warm. Poured it once again in the glass. Huge frothy, bubbly head that's popping mad! It's diminishing at quite a rapid rate that's it's as if I'm watching something fade away in fast forward. Very Strange, yet really cool looking. It went from two inches to nearly nothing in about a minute and kind of reminded me of that dead body decaying in Der Todesking! Mmmm...

Smell is fruity up front. Loads of honey and cocoa. Hops lay in wait. Low malty undertones this time around. Taste is sweet overall. The level of alcohol comes through in a spicy haze that blurs the senses. Also, the brew's true flavor seems to shine once it warms. It's a bit lighter than their usual fare. Goes down rather easily, like water. Leaves a little bit of a spicy residue in the mouth, but it's not really strong at all. Very pleasing, yet, not terribly exciting.

I wonder, way back in the day if this was truly the "drink of the gods", then I'm sure they were some very pleased, short lived motherfuckers. I liked this beer. Didn't love it. It slightly reminds me of Wachusett's Milk Stout, only a bit stronger. The 9% ABV is decently hidden, but I like the way it comes through. I would have liked a bit more of those chilies. I'm a heat fiend. This Ale tastes good, but I've never been one to understand the mixing of cooling chocolate with heating chilies. The cocoa always seems to take over. I'd buy this again if they made it to the extreme, but it seemed a bit tame (though I have been drinking a lot of crazy shit lately). I appreciate what they were going for, and with the history of this type of beverage it is special, but my gods... are not their gods. If you buy this don't even bother putting it into the fridge.