About: "Brewed with ingredients from each and every continent, this is slightly spicy ale, with a mouthful of rich flavors. Pangaea is a great food beer. Our list of worldly ingredients includes: Crystallized ginger from Australia, Water from Antarctica, Basmati rice from Asia, Muscavado sugar from Africa, South American quinoa, European yeast and North American maize." Pangaea info. 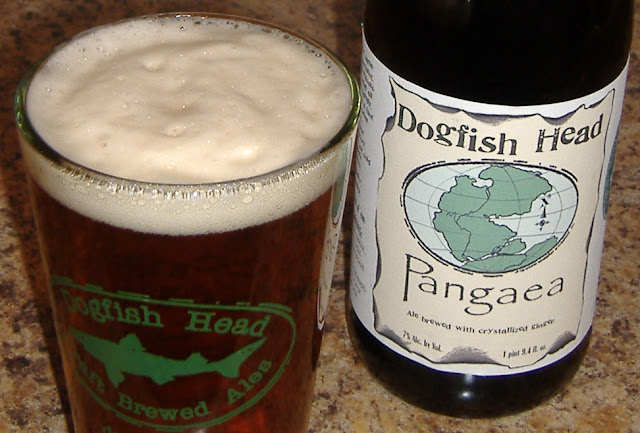 Thoughts: Let out one of the loudest hiss sounds when I popped the cap. Poured a pretty light and totally transparent amber orange with a fluffy white head that settled down and never left. Medium carbonation bubbles rise slowly.
Smells kinda like peanuts at first. Weird. No wait, that's yeast... It smells really earthy. Not like wheat, but grain rather... and some flowery hops.

Tastes a hell of a lot better than is smells! Not saying it smells bad, but I did not expect that at all. The sugar hit me first. A sweet fruityness, like dates and figs. Then the yeast. It's not sour or bitter really, but it is a wee bit strong. Rice and corn then round it out. The backdrop of the entire brew is that crystallized ginger. It's pretty wonderful and flows evenly as the other tastes emerge and fall back. High hops, high malt, high yeast, and low alcohol. In the end it still ends up tasting and smelling a bit like peanuts. Which isn't necessarily a bad thing, but it is unique. Little bit of a bready aftertaste too as if I ate a peanut butter sandwich sans jelly or some Thai Noodles.

I really like the idea of this beer. I think it would be cool if they went back and make like a Sequel to it, using all different ingredients from each continent. I know for Antarctica that may be difficult but perhaps they could put some of The Thing in it, or Penguin Blood? I'd like to see how it would taste if it didn't have that Belgian Yeast. It's tolerable in this beer, but man is that stuff overly strong. Overall, I'm not disappointed, but it could be better. That said, I did happen to enjoy it.

I had Pangaea at some point last year I think. I remember liking it quite a bit for it's interesting flavors. I know what you mean about the Belgian yeast though. In non-Belgian ales, it can really throw you for a loop and overpower the other flavors of the brew.

Dogfish has a few really interesting beers along the lines of this one if you can find them. I would suggest Bitch's Brew if you can find it. The issue with Dogfish is that their distribution isn't the best, and they put out a lot of limited beers that can be hard to get. But the good thing is that their beers are excellent.