About: "In the early 1990s Dead Guy Ale was created as a private tap sticker to celebrate the Mayan Day of the Dead (November 1st, All Souls Day) for Casa U Betcha in Portland, Oregon. The Dead Guy design proved so popular with consumers and especially Grateful Dead fans, that we made it the label for our Maierbock ale. Even though the association with the Grateful Dead band is pure coincidence, we have gratefully dedicated Dead Guy Ale to the Rogue in each of us." Malts: Northwest Harrington, Klages, Maier Munich and Carastan / Hops: Perle and Saaz / Yeast and Water: Rogue's Pacman Yeast and Free Range Coastal Water. 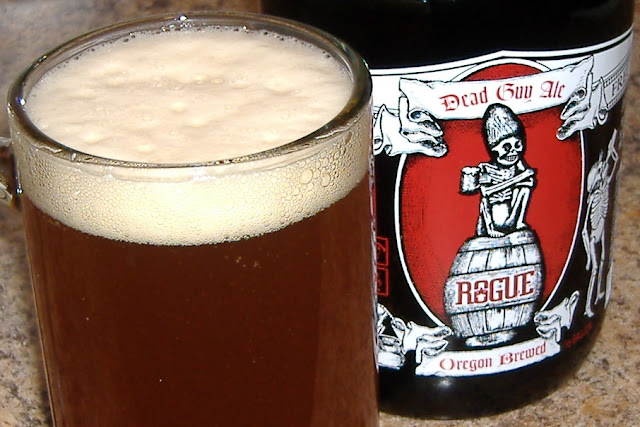 Thoughts: When I cracked this growler open I took a look inside and noticed creepy, swirling smoke that reminded me of dark nights creeping through the graveyard. Very plan 9 like fog. Poured a very amber looking amber that settled into an almost orange tone but not really with a one inch slightly off white head that stuck around for a few minutes. The brew is really hazy, but I can make out tons of carbonation bubbles rising up the sides of the glass.

This smells pretty incredible. Heavy bits of sweet malted toffee candy bars. Cold and smokey like a dark Halloween night. It also very slightly reminds me of those chocolate cereal straws that you drink milk through. After a while of drinking it smells like straight up Graham Crackers. Nice!

That's pretty damn good. Sweet honey-like malts flow forward then retreat and afterwards these peppery hops start to bounce their way in and tingle around. Bitter hops resonate on the back of the tongue after breathing in for a while. Something cool about this beer, keep it in your mouth for a while and the process repeats itself once before settling down to that lingering bitterness. This beer is really sweet. Not super chocolatey, but a minor chocolate touch on lovely biscuity malt with a touch of honey and sugar.

Medium near almost-heavy body. Leaves behind a bit of filmy aftertaste.

This is my first time drinking Dead Guy Ale. I bought this, not only because I wanted to try it for so long, but also because I wanted the Growler with that cool ass artwork. Seeing as I was slightly unimpressed with the last two Rogue ales I had tried, I was a bit worried. Well that thought was put to rest when I drank this. Dead Guy is brewed with Saaz hops, but I didn't taste any funk this time around. Strange that the few beers that I seriously disliked, I later found out all had Saaz hops in them. Perhaps it was a mix of Saaz and overly strong Belgian yeasts that was the problem, or bad batches. No matter. This beer tasted perfectly fine and I finished this growler off in a single sitting, leaving me feeling comfortably swell.