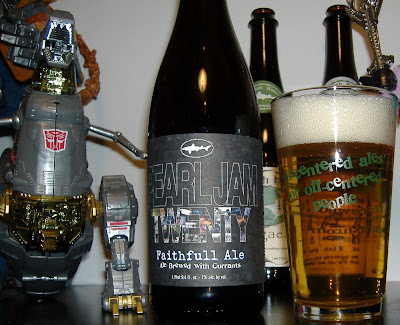 About: This is a concept beer combining the band's love of  fruitful Pinot Noirs and Mexican Lagers. "We did a very low hopped Belgian golden ale, we fermented it at cooler temperatures which subdues the spicy fruit notes of the Belgian Yeast to allow the more robust notes to shine through. [It's] fruit-forward from 10 incremental additions of black currants over a one-hour boil."

"To me, 'Ten' is the perfect example of a record-lover's-record. The whole thing rocks," says Dogfish Head President and Founder Sam Calagione. "As an off-centered brewery, we believe in celebrating the breadth of our whole portfolio and we feel an affinity for Pearl Jam a long-player band in a singles-obsessed world."

Thoughts: Poured a very light yellowy amber that resembled a mellow gold in the glass. The bubbly head was slightly off-white and faded pretty quickly.

Smells like lager for the most part, but with a little bit of a fruity tone. Not really much going on here. It's a bit like sliced pears from a can, corn flakes and cigarette smoke.

A bittersweet, smokey and malty brew with a very light hop bite at the end and a lingering sour spot left at the back of the tongue. The Belgian yeast they attempted to subdue is still present, it's spicy and apparent, yet not overly harsh.

Dry and a little crisp. Kind of feels like a wine. It's a bit bland overall. I'm pleased with the spice of the Belgian yeast and that the harshness of it is held back, but for the price, this just doesn't cut it for me. Although, I will say that Sam's aim to create a blend of "Pinot Noirs and Mexican lagers" is no doubt successful with Faithfull Ale.

This beer is easily drinkable and definitely not a sipper. But would you want to slam down a fifteen dollar brew in a couple minutes? I'm not going to. I really didn't know what I was getting myself into with this one. It's basically a light Belgian Lager, which I don't mind. It's not bad really, not by any means, but it should be better. Hey, just like Pearl Jam's music. Whatdoyaknow.

Email ThisBlogThis!Share to TwitterShare to FacebookShare to Pinterest
What the... Beer, Dogfish Head, Pale Ale

I'm glad I only bought one bottle of Faithful Ale, because I found that I'm not a huge fan of black currants. It's definitely not a sipper, but I made the mistake of letting the last half glass get warm. It did not go down easy.