About: "Working with our archeologist friend Dr. Pat McGovern, this beer was created to incorporate the ancient ingredients and techniques described in Egyptian hieroglyphics.

Ta Henket is brewed with Emmer (an ancient form of wheat) and loaves of hearth-baked bread, and is flavored with Chamomile, Dom-Palm fruit and Za'atar (Middle Eastern herbs). To ferment Ta Henket, Sam and friends traveled to a date grove near the pyramids (Cairo), set out baited petri dishes and captured a native Egyptian yeast strain (referred to as Saccharomyces)." 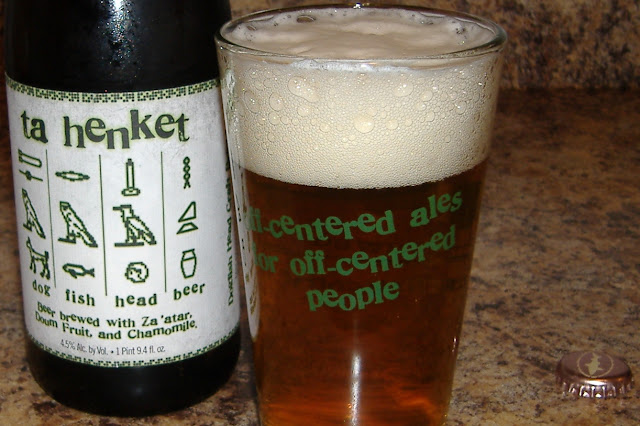 Thoughts: Poured an ultra transparent almost yellow, light honey amber color with a stark white head that popped and bubbled like crazy. It settled down quickly enough with bits of larger and smaller bubbles, surrounded by the foamy middle and edges. Carbonation seems a rather light medium.
Smells a bit malty, somewhat grassy. It's kind of like a sweet malt liquor. That must be the chamomile mixing with the Egyptian yeast.
Huh! It's pretty mellow. Very Light herbs, and that special yeast strain seems to be overpowering the doum fruit and chamomile. I actually expected a lot more chamomile than I'm getting here, but it's still blended right into the brew. It's peppery but not really spicy at all. It's bready, little hints of wood or wheat, and sprinkled with the flavors of a soft oregano and basil.
Pretty damn frothy and chewy at first. Gets a little watery once it starts to warm. After a short while it becomes almost intensely drying.
Not at all unpleasant, but nothing really to get excited over. For the price I'd have to say that it's not worth it - if only to try once. I'll admit that I was a bit hyped up for this one, but it didn't really deliver at all. It's not a bad beer by any means, but I doubt this will be memorable at all aside from the very cool artwork and story that goes along with the brew. Hopefully this is a trend that Dogfish Head can break sooner than later. I've liked every one of their brews that I've tried, but these experimental beers are horribly overpriced.
Laid to Unrest by DrunkethWizerd

I heard about this when they brewed it initially, but didn't know they actually bottled it. Thought it was just available on tap at their brew pub. Truthfully I'm still pretty curious to try it, despite the so/so review. Even though their ancient ales tend to be expensive and don't always match my taste in beer, I still appreciate what Dogfish is doing and think it's pretty cool.

I love the things Sam is doing with Dogfish Head. I think a lot of the brews he makes are really interesting and fun. His interviews are great and really enthusiastic. But the price, dude! At least make bombers for six to ten bucks. I like the big bottles though.

You should definitely try this beer. It's good. Just didn't blow me away.

Sam seems like a really cool dude. If you ever get the opportunity, take a trip to Delaware to visit the brewery and the brew pub. The brewery tour is great and you get to sample free beer. They were sampling their Indian Brown, Palo Santo, Olde School and Punkin when I went, so they're not holding anything back.

The brew pub is awesome because they have exclusive and experimental brews on tap. The food is good and the liquor is good too, because they have their own distillery upstairs. Not to mention Delaware is a tax free state, so you can pick up Dogfish beer pretty cheap down there.

Finally got a bottle of this and man was it different. I imagine it tastes like a tomb inside of an Egyptian pyramid. I don't know if that's remotely true, but I like to think so. I really enjoyed it, and would definitely pick this up again. Though my next ancient ale purchase will be Theobroma.