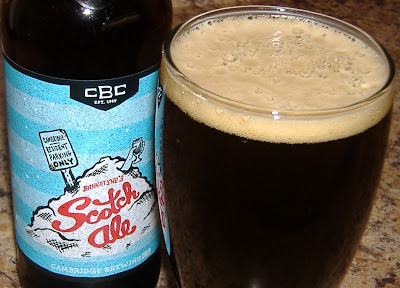 About: "This strong ale style comes directly from Scotland, boasting a huge, complex maltiness and very full body, which finishes with a long, herbal, hoppy dryness. We craft this traditionally big, malty beer from imported Scottish Maris Otter pale malt and a touch of roasted barley. We then caramelize the strong wort in the kettle and subject it to extended cold-conditioning to round out its myriad complexities. Intriguing flavors of caramel, chocolate, molasses, and a hint of treacle are not uncommon to those perceptive of palate, so slip on that old kilt (wear whatever you want underneath- we’re pretty open-minded.) and enjoy!"

Thoughts: Poured a dark reddish brown with a very slim tan head that depleted rapidly. The beer is hazy, and the slightest bit see through. I'm not seeing much carbonation bubbles.

Smells like sweet coffee. Wasn't expecting that. Loads of malt coming through.

Medium, and a bit syrupy. Very rich and creamy. Prepare yourself.

This is like a mix of a big Scotch Ale and a little bit of a Stout. This beer is strong and seriously malty. Overall a pretty cool beer. It's been a short while since I had a downright mean and nasty malt bomb like this. I like it. 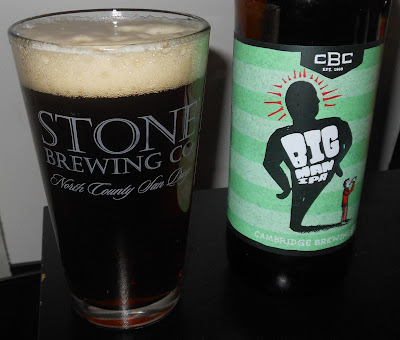 About: "Our Winter seasonal beer is here! Originally brewed in September of 1992 at the request of three bartenders/managers (who have since gone on to great fame and glory) Big Man I.P.A. has been a favorite seasonal brew at Cambridge Brewing Company ever since. Legend has it that the grist weight of Big Man Ale was their combined total weight – 770 pounds of malt for 10 barrels of beer!

Deep copper-colored and unfiltered (as are all of CBC’s beers), it boasts a full body complemented by strong, robust flavors. Its rich notes of malt and caramel are offset by very aggressive hopping - it is kettle-hopped with Columbus, Cascade and Amarillo hops and further dry-hopped with even more Cascades and Amarillo. These hop varieties lend a fruity, citrusy character to this big malty beer, in the style of a “winter-ized” I.P.A."

Thoughts: A Winter Seasonal IPA huh? Interesting. I wonder how it will compare to a certain other beer like that...

Real dark color on this one. It's like a raspberry, ruby toned beer and quite a bit darker in tone than a lot of other IPAs. It's a lot more reddish than the usual orange standard, but that's what "winter-izing" is all about, right? The head is puffy and white, and the beer is very clear.

Malts get pretty much destroyed by the abundance of hops here. It says on the bottle that there's a "robust malty balance" to this, but this is very hop heavy with a resinous blast that takes over. Overall though, I'm finding that it's not terribly complex. The flavor actually fades rather quickly. Aw man... but there's lots of floral and grassy hits with each gulp, so keep gulping away! It's a very good effort, but it gets a little thin on the taste once it's down. Tastes of a quality brew, just wish it was a bit longer lasting. Once it warms up it starts to give off this nutty kinda flavor, like unsalted cashews.

These guys tried with very nice results to get Celebration Ale down with the scent, but the taste just falls apart at the seams once swallowed. A damn shame too, since I really dig their other brews. This one is still good mind you, but not as good as their other stuff. Mouth is medium, watery, bubbly and popping.