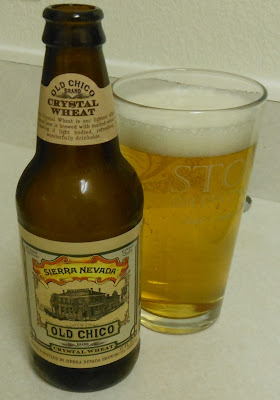 About: “Brewed using 65% wheat malt and 35% barley malt. This filtered wheat beer is light blonde in color, light bodied and has a wonderfully clean finish. This is a great choice for craft brew novices and beer aficionados alike.”

Scent is of low level malt, and wheat. It's very light, and there's not much to it as the smell isn't hidden or hard to get.

The taste is just like the scent. Wheat... lots of it! Light caramel, water and a slight bitter slap at the end. There's not much going on here.

Mouth is light, very crisp, refreshing - a great brew for older folks and people swimming in the community pool.

This is like a watered down version of their pale ale, only wheat based. It tastes better than other light beers, especially the mass produced shit, and it's decent for a wheat beer, but it's still a light beer (for Sierra Nevada) and that ain't my thing.

I never knew that this beer existed actually. When I saw it on the shelf in the supermarket I said to myself, "what the hell is this?" And on closer inspection I said aloud, "Sierra Nevada makes a light beer?!" What in the fuck for? But while I don't have a use for this brew, I can see why they put it out, as there is a demand from special people for light beers. And if you're a brewery that doesn't make one aside from Draft, then why the hell not? Then again, it's only sold in Chico, CA and now a limited surrounding area... so I guess I don't understand really.

Never heard of Old Chico, but it sounds like a great sessionable summer beer. 4.8% ABV isn't exactly "light", so I'd give it a try if I ever came across it.

Well it tastes light as fuck. It's the lightest tasting Sierra Nevada brew that I never thought I'd imagine tasting.