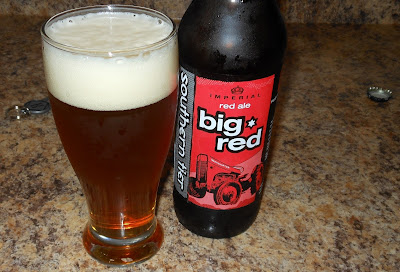 About: "Inspiration can sometimes be found in the strangest of places. This eccentric brew started with a single flower from a hop named Hallertau. The delicate and spicy aroma present in the flower has been responsible for generations of great beers. Hallertau hops are to a brewer what an old tractor is to a farmer: reliable. Big Red expresses the nobility of Hallertau by placing it at the forefront of this Imperial Ale. Pour it into a snifter. A swirl allows the spicy aromas to come forward as a taste to the lips reveals the complex balance between sweet malts and the bitterness of hops. Big Red’s ability to please is as dependable as your grandpa’s old tractor. Please consume wisely."

Thoughts: I really wanted to find this so bad as it had been retired and I didn't have the bottle for my collection. Traveling back from the IMAX cinema I decided to get off the highway and roam through a few towns... no luck with anything for the most part as this is fucking wine and salad country, but I never expected that I'd see this bottle in the fridge of a hole in the wall!

Big Red poured a light amber orange that formed into a deep orange in the glass, with a thick off-white head formed by small bubbles. The beer is incredibly transparent and there seems to be a nice amount of carbonation.

The scent is definitely hop forward and heavy. The hallertau smells very robust and there's a low level malt rumbling underneath.

This is a powerful tasting sweet and savory beer. There's not really much too it ingredient-wise but it really bursts at you. Those sweet caramel and lighter chocolate malts form the foundation, and these hops just pop throughout and add another layer of flavor that is a tad peppery, spicy and just downright excellent. There's a great mix of malts and hops here. While the brew is smooth and sweet, the hops bring out a gentle bitterness that doesn't hit too hard and adds to the flavor and aroma greatly. The balance is about 50/50 I'd say. It's done remarkably well. This is a beer that delivers on the taste from the first sip to the last gulp. One where every time you drink you feel it all over again as if it's the first time you've tried it.

Mouth feel is smooth and gentle.

I'm glad I got the chance to drink this before it disappeared forever. It's not nearly Southern Tier's best beer, but it's a solid one and really hit the spot. 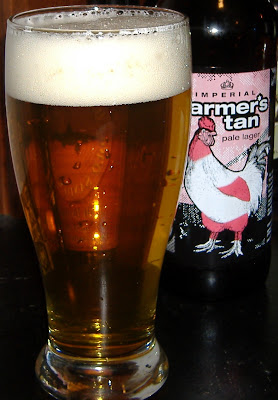 About: "The hallmark of hard work. Neolithic humans evolved from nomadic hunters into a more settled agricultural society, changing life forever. The "founder" crops they raised included wheat and barley. It is little surprise that the first examples of brewing appeared during this age. Brewers owe much to that epoch. Similarly, we thank our farmer friends of today for cultivating the ingredients that are responsible for the beers we now enjoy. Their laborious days spent outdoors under the hot sun earn them respect, as well as a mark of distinction: the farmer’s tan. So, roll up your sleeves and turn the soil. Just be sure to chill a bottle of Farmer’s Tan to enjoy after work. Malts: 2-Row Pale, European Pilsner, White Wheat / Kettle Hops: Magnum, Mount Hood / Dry Hops: Santium, Sterling and Mount Hood."

Thoughts: Poured a very light straw yellow that has now become the most transparent beer I've ever witnessed, with a huge two finger fluffy white head. No carbonation bubbles rising up. Kinda looks like the color of the sun in the light, though not as blinding.

Smells strong. Wheat and hops that are ready to blast off. It's got a somewhat fruity tone. Spicy with a touch of moldy honey, and a little flowery as well. Slightly pungent, but at the same time you get a hint of candy.

Wow. First gulp was like a roller coaster ride. This is one tasty pils! Grassy, wheaty hops with a gentle malt backup that slowly rises and evens things out before retreating. Peppery, musty hops after breathing in. This beer goes through some really cool circling of flavor stages. High alcohol is laying low tonight, probably behind the little bit of funk. Or maybe I'm just used to it. Despite that, this brew is relentlessly strong! So watch out.

This is one thick feeling brew. Seriously full bodied... which is absolutely nuts considering it's the clearest beer I've ever seen. Then again, it's got artwork of a rooster with a farmer's tan which implies that it had been wearing a short-sleeve shirt and that's pretty weird too. Kinda funny though.

Aftertaste is a bit of sweet grass and strong grapefruit on the back of the tongue. If this had just a bit more of a malt presence it would be perfect. After a short while it gets a bit chalky, like earthy minerals. Little bit drying. Not my favorite Southern Tier by far, but it's different from their others and that's what really matters. They don't make the same beer over and over and just name it something else. All that said, you gotta have a strong will (and tongue) to get down with the farmer's tan. It's pretty brutal, but in a very good way.