About: "Fermented with traditional Belgian barley, yeast and candi sugar we have taken the liberty of adding a generous amount of the finest honey to create the only ale of its kind. Lightly carbonated when bottled or with a thick head and fantastic ‘Belgian lace’ when poured from the tap. It is similar to a tripel, but paler, drier and lighter bodied due to the honey. The style is often named after the devil and of course we have taken the opportunity to do the same - our version, "Diabhal" or Devil in Irish. Winner - 2009 Gold Medal: Braggot - International Mead Festival." 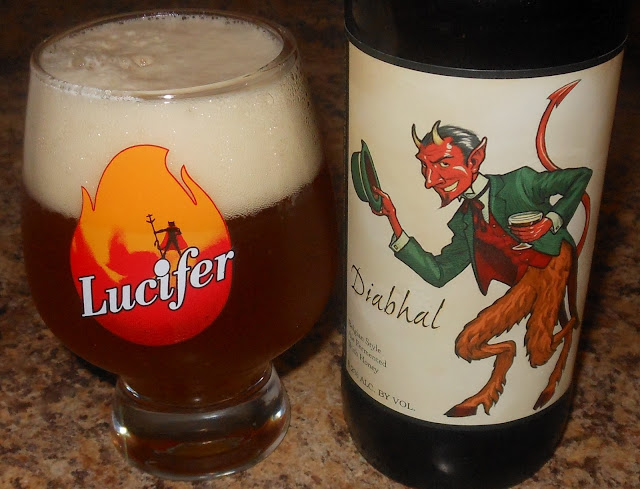 Thoughts: Poured an incredibly cloudy auburn-red! Almost looking a bit like fruit juice or the rind of a pear. The bubbly white head was thick to form and didn't entirely dissolve, instead leaving a thin layer atop the brew. There was a loud pop from the flip top cork and some smoke flowed out, but there doesn't seem to be much carbonation at all.

Light but a dangerous rumbling alcohol, very fruity (mostly pear and sour apple) and spicy. It's got a gentle sweetness from the honey, and a little bit of tart from that belgian barley and yeast. Candi sugar and honey give it a bit of a mystic creep. It smells a bit dangerous.

Wow! That is some good shit. An amazing detour from the usual and a great sipping beer. It's got an absolutely perfect balance of sweetness and tart, and it's really mind-blowing how it goes through the stages and just pulls back on each one at the exact moment. Incredible. Notes of pear, apple, grapes, honey, sugary type spices, steaming hot bread, cleverly hidden booze and a touch of orange zest in the end. It's got a fierce taste that slowly expands and twirls around, and leaves a crisp, fresh aftertaste. That immense taste wears off somewhat quickly after the swallow, which is a bit unfortunate, but it leaves you just craving it that much more.

Feel is a bit foamy, light on the tongue, easily downed and lightly coating on the teeth.

I've never been this intrigued by a seemingly Light beer (one with an 8.2% ABV if that's possible), or perhaps a Heavy Pale Ale rather. But I like it... it's got style. The taste of the beer isn't incredibly complex, it's got its own personality when it comes to how the flavor is delivered. Once it warms the alcohol here exposes itself much like the devilish character on the label exposing his horned head. Be prepared for a booze takeover if you take too long with this one. It is indeed an odd beer, very cider like with Loads of honey! Diabhal would fit right in with some of DFH's occasional rarities, and if you've tried many of those, then you'll probably be accustomed to this one somewhat.

This bottle is going into my collection. You can't be a drunkard without a bottle collection after all. ;)