About: "Positive Contact is the second batch of the Imperial Belgian-Style Wheat beer that Sam and Ben brewed a couple months back. For this batch, we stepped up the spice and cider additions. Instead of 200 lbs of apples, Ben pressed 300 lbs of organic Fuji apples for a total addition of 25 gallons of fresh pressed cider, which was added to the whirlpool in order to really bring out the cider character. The amount of cilantro was nearly quadrupled with 4 lbs total, which was pureed with a portion of the cider and then added after the boil was done. The cayenne was doubled, but added directly before the beer was transferred from the kettle to the fermenter in an effort to minimize the burn while increasing the flavor and aroma contributed. A different type of wit yeast was used and then fermented slightly cooler to keep the yeast character minimal and act as a supporting role to the main players the cider and spices. Lastly, this batch was boiled for less time than the original batch, leaving the beer with a lighter straw color than the amberish hue of batch #1.

This beer part of our Music Series of beers... this one is an amalgamation of hip-hop, beer, cider and a DIY culinary experience! Sam and Dan the Automator of Deltron 3030 teamed up to create Positive Contact, based on Dan's favorite ingredients and Dogfish Head's innovative brewing practices." 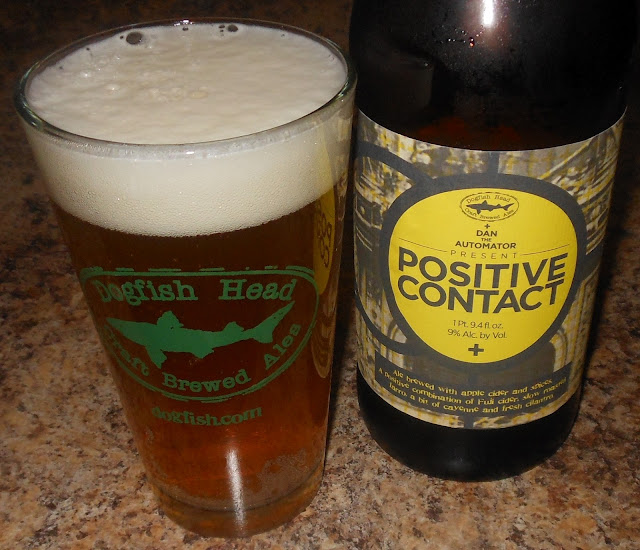 Thoughts: This beer is a light yellowish amber with a fluffy-topped white head full of incredibly small bubbles that lingers for about forever. It's just slightly hazy and there are a fuckload of carbonation bubbles rising up, going absolutely nuts. Also, there seems to be a huge amount of little flakes just floating around inside the brew, drifting... just like Megatron towards Unicron.

Smell is of Belgian yeast, wheat and unsweetened apple cider. It's got a really herbal type vibe to it, the cilantro is pretty heavy here, and it's fluctuating between sweet and sour - bending more towards sour that's for sure. Cayenne pepper is almost unnoticable. If it weren't listed on the bottle I would not have noticed.

I don't know if I'm becoming more accustomed to DFH limited release brews and their ingredients to the point where I can tell by the taste that this is in fact Dogfish Head, or if this beer is just incredibly similar to one of their other bottles I've tried. Perhaps a little bit of both? So yeah, anyways, everything here in the ingredients mingle together quite well. While the cayenne pepper is pretty subtle, one belch will bring the heat. So it is there, yet subdued. You can taste the flavor of cayenne way in the distance but there's no real initial heat in the drinking. It's got a gentle spice factor, very mild and it feels more like a cracked black pepper. As it warms up it gets a little sweeter and more of those spices come out. In fact, the beer tastes a lot better once it gets warmer as everything is more pronounced. It still tastes the same, it's just stronger. Alcohol is well hidden no matter what. The taste is basically just a mix of a Belgian wit with Apple cider, and I'd say that it's actually pretty harmonious here. I'd normally be worried that the cider would taint things a bit but it doesn't at all. It still feels and tastes like an actual brew, but with cider involved. If you're used to Belgian type tastes then this sort of thing will be nothing for you to handle. Plus as an addition, there are no real ill-tastes to it, even for a sour.

Dries the throat rather instantly and leaves a tickle.

Well, I've tried it and that'll be it for this one. It was an experience that brought back a few things, memories and thoughts from some of the first Belgian ales I had tried. This beer was also released in a box set which I didn't care to buy, not that I ever found one: "The beer was packaged in a dynamic box set of six 750-ml champagne bottles, with a 10-inch vinyl EP of four new Deltron 3030 remixes created exclusively for this project, and a list of Deltron 3030-inspired recipes from a small group of renowned chefs. Invite some friends over, rock the album, drink the beer and whip up a multi-course meal. It's a house party in a box." It's a cool idea I guess. I doubt I'd ever use this beer to make a dinner while listening to that vinyl though, but that's just me.