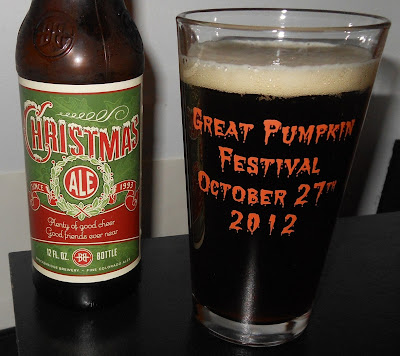 About: "Bottled joy to the world. The chill of a Colorado high-country winter calls for a beer with extra flavor and strength. Here it is. At over 7% alcohol, with a sturdy texture and rich flavors of caramel and chocolate, our holiday seasonal is the fermented equivalent of a good fire. Malts: Two Row Pale, Caramel, Chocolate, Black / Hops: Chinook, Mt. Hood / Yeast: Top Fermenting Ale Yeast."


Smells of a Strong Ale. I've gotten used to this type of beer. At first it was very much an enigma to me, as were "Christmas" beers in general. Now I don't necessarily go in looking for spice all the time. I can accept different styles for the classification. I'm picking up caramel and chocolate malt for the most part. This beer is very malty. Mixing pale and black malt is pretty interesting. Black malts have a very distinct characteristic to them, and while it's apparent here, the pale malt is really pulling everything else back a bit. I guess you can say that the smells are branching out, like a tree. And that tree is decorated with small popping bits of classical hops.

This beer has a pretty heavy taste, and there is a touch of natural spice from the ingredients here. It's got a rich dirty caramel thing going on mostly, with a peppery backup and touch of sweet fluff. Hops are noticeable after the swallow and it's followed with a bit of a clove-like smokiness and a rusty cola aftertaste. The brew itself is a tingler and dances around on the tongue. It's got a dusty-like taste but I doubt there is any cinnamon in this. After a while the heavy malts and gentle bittersweet flavor of the brew is matched with some sprinklings of grapefruit citrus.

Mouth feel is medium. I'm picking up a slightly watery texture, but the ingredients here add a lot to it so doesn't seem so. It slightly foams up but goes down quickly and slowly fades off into the distance.

This is an OK beer. It's not overly flavorful, nor does it leave a lasting impression at all. From the standpoint of a "Christmas" Ale, this could be any beer for the winter months. Nothing off putting about it at all, and it's generally pleasant for the most part. Really nothing special.