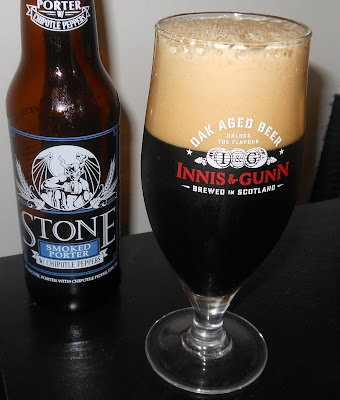 About: "Stone Smoked Porter w/ Chipotle Peppers is a thing of spicy glory, with the just-right heat of smoked jalapeños (aka chipotles) that combines beautifully with the beer's peat-smoked malt and roasty character. The idea came about in 2006 when Merchandise Manager Chris Carroll suggested we make a special "South of the Border Stone Smoked Porter" for Cinco de Mayo that year. One sip, and we were hooked! Malts: Pale, Crystal 75, Chocolate, Peat-Smoked / Hops: Columbus and Mt. Hood"

Thoughts: The cap popped off of this one with a high pitched hiss and the beer itself poured a dark reddish-brown with a light, almond colored head.

Aside from the base of the beer, the scent from this one is really different from the vanilla beans version. First off, it's a lot more subtle. Those chipotle peppers aren't really coming through too strong here. It's incorporated into the beer scent pretty well, but I thought it would be coming at me like that vanilla. Which came on strong and heavy. It's got a fiery flare about it overall, but while the vanilla was up front, the chipotle in this version is just an undertone. Mild chocolate and a few coffee beans back it up.

Well, the chipotle is all in the taste, that's for sure. Too bad it's not hot. There's a very nice blend of flavors here though. The peppers add a subtle spice to the whole brew and just add another really awesome dimension to it. It's not much, but definitely an improvement. Hell, anything with a little added heat is always better, that's the way I think. I just wish this one were a little hotter. Chipotles have a really unique taste, but it all seems a bit too far removed here. There's a little bit of grass on the end of this one. Weird, I didn't get that in the other one. Slightly disappointed? If I can find a bottle the day it's made next time then I'll grab it and drink it immediately. If there is a next time! Probably even drink it warm too.

Mouth is a bit watery and just a little frothy.

I enjoyed this, but not as much as the vanilla bean version and honestly I thought it would be the other way around as I love chipotle peppers. Vanilla is cool too I guess though, and wins out in this beer-off. 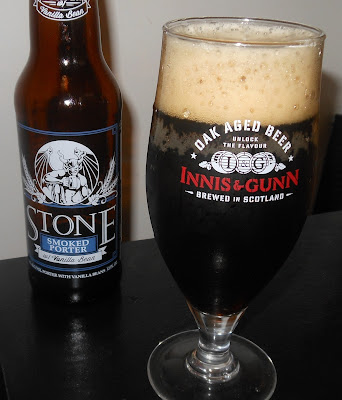 About: "Stone Smoked Porter w/ Vanilla Bean was the brainchild of Small Batch Brewer Laura Ulrich, who had a stroke of genius after trying Stone Smoked Porter poured over a couple scoops of vanilla ice cream. The complex flavor of Madagascar vanilla beans melds perfectly with the chocolaty  malty, coffee-like character of the beer, making it almost like a liquid dessert, but without an overbearing sweetness. Malts: Pale, Crystal 75, Chocolate, Peat-Smoked / Hops: Columbus and Mt. Hood"

Thoughts: Smoked Porter VB poured a dark reddish brown color with a huge light tan head on top. The bottle didn't make any noise when I popped the cap, but it poured out lookin' quality.

Holy shit this smells awesome! It's like straight up chocolate milk with a touch of vanilla, and a hint of the booze man. It's like, chocolate and vanilla soft serve with marshmallows on top. Or a chocolate milkshake. Damn, that's badass. Minor hint of coffee. Lay back coffee... lay back.

The taste is definitely smokey right off the bat. I'm thinking on first sip that this is one of the best, in not thee best Porter I've drank thus far, though I haven't had many. It's got a certain rawness to the taste. Those vanilla and coffee beans are just mingling in harmony here, then there's that blast of smokiness that comes rushing through the middle. Mild and slightly bitter chocolate notes ride this beer out and there's nothing at all unpleasant about it. Hops take a back seat but start to show about halfway through. Bottom line is that this one is just downright enjoyable.

Mouth feel is pretty watery, there's a lot of froth, and I do wish it could be a little thicker, but it's not a problem. Aside from that it feels like a pretty solid beer. Nicely done. Low bitterness, chocolaty, and that vanilla swirl just takes it to the next level.

Damn. How disappointing. Maybe it would work better with a bag of fiery hot Onyums.