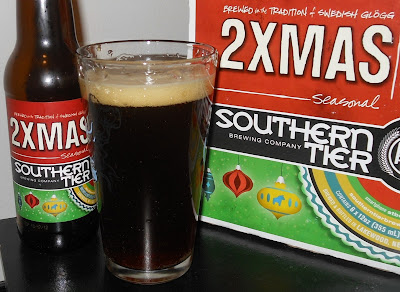 About: "Swedish flags are a fairly common sight in our part of the country. Holiday parties often have warm concoctions of spices and booze at the ready to knock the ice off of toes while raising spirits. We were inspired by a “Glogg” party, deciding on the spot to brew a beer that pays tribute to this Nordic tradition. 2XMAS Ale combines traditional brewing ingredients with figs, orange peels, cardamom, cinnamon, clove and ginger root. It’s a holiday addition to the 2X line and another reason to toast to the season, but unlike Glogg, we recommend serving this one chilled."


Smells like pie, man. Light on the nutmeg, but those figs really come through with a vengeance. Little bit of cinnamon and that thick toasted sugar. The smell is like taking a bite out of a muffin top, say a pumpkin variety or pecan pie type thing with some thick candied sugar on top. It just smells freshly baked. Not too overpowering with booze at 8%, but just a well accomplished liquid dessert.

This beer is nuts. The booze comes through gently in the taste about halfway through the first gulp. You're immediately hit with those spices and just a sweet and savory flavor overall. The spices don't go over the edge like some other spiced beers either. It's not a spice bomb at all. They slowly fade, exactly at the right time each and every gulp. There's no chalky or powdery after burn, just soft wetness and a brilliant aftertaste of a festive and enjoyable brew.

I had a fig tree just down the street from my house as a kid. I've smelled them and even eaten them a few times throughout my youth and that old familiar scent and flavor really comes through here. I'm sure if you've never had them you might not notice, but you can always think of Fig Newtons and that's what you've got right here. It's got a bit of a Dr. Pepper / Cola taste once everything fades out, but it's nice. The hops and orange peel here are really in the background. You can catch it during the initial drinks, and after a while it starts to pick up and get a little stronger in the aftertaste, but this beer is heavy on the malt, figs and gentle spice up front. Really cool shit mister.

Mouth feel is a bit of a very light medium. It's slightly syrupy and coating. Aftertaste lasts long and the best of the best flavors here cling to the tongue while the dry spices and hops fade out, leaving the sweetness of the malts and those funky figs to do their work. Not mind-blowing .. but in a word, amazing. This is the stuff that dreams are made of.