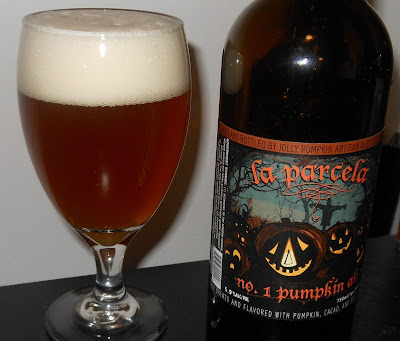 About: "[Blend 15 - Bottled 09-21-2012] Ok, so the joke was that Jolly Pumpkin doesn't brew a pumpkin beer. Well, now we do. Just this one. Packed with real pumpkins, hints of spice, and a gentle kiss of cocoa to liven the soul. An everyday easy way to fill your squashy quotient. Guess now folks will have to find something else to joke about..." We'll see.

Thoughts: Poured an ultra hazy dirty orange color that's almost auburn or slightly yellowed, but hardly. Carbonation is off the charts. Tons of small white bubbles comprised the head before it eventually turned to fluff and puddles.

Smells like bubblegum and spice. Doesn't smell much like a traditional pumpkin beer at all, but that's not a problem as I welcome the different. I don't expect every pumpkin brew to smell like Pumking, but I do hope for each new one I try to have at least some personality. This actually smells like something my mom used to make... it was like a custard or something, sprinkled with nutmeg and other spices. I was never really into that stuff as a kid, and I'm not really into eating flan these days, but it doesn't smell bad. It's inviting, though bubbly. Like a creamy, bubblegum pumpkin cidra.

Taste starts off with a ton of malt, then a hard fucking slap in the face full of sour, followed by a quick spike of spice that injects then retreats. Gawd dayum. This brew is very earthy, dirty, herbal, and duckface inducing. Noticing tons of lacing. After a few gulps the spices start to come through a little bit more, so it's not obtrusively spicy up front obviously, but once the palate adjusts to the harsh sting of first contact the overall flavor and blending becomes a little more evident. I suppose if (un)Domesticated Wild Ales are your sort of thing and you like a bit of pumpkin mash and a lot of pepper in the background, then this beer would be right up your dark alley. I'm gaining the tongue for it, and really I don't mind (I'll finish the job you can count on that) but believe me when I say that this is a harsh one. Especially for the unexpected drinker. You've got wild ale yeast, straw and hay, tart and sour mash, lighter Belgian characteristics, it's a bit acidic, and there's a dry spice on the end of the tongue once it goes down. I love sour stuff. Ever since I was a kid I've been obsessed with sour, and on top of that, I drink pickle juice just because I love the stuff. Not to mention with all the beers I've tried so far, I think I'm gaining a pretty good handle on what is fuckin' harsh and my overall opinion on this one is: It could use a touch of sweetness. Bitterness and Tart is off the charts here and it's slightly painful. Every single spot in my mouth tingles and quivers when this beer hits it, like I'm biting down on aluminum foil or chewing raw citrus-less lemons (if that even fuckin' makes sense!?).

That said, I've typed all this and I'm not even half way through the bottle. So I'll quickly get to the other stuff and them I'm off to chug the rest. Mouth feel is slightly foamy due to all the carbonation, it bubbles up quickly once it comes in contact to saliva and remains an enigma after that. Finish is crisp, drying and semi-clean. Aftertaste is good too. Like an apple cider and flowers. It gets very floral and the slightest hint of fruity, but an artificial type. This is one fucking weird drink, man. It takes a little getting used to.... and if you're not used to a lot of other beers like this, it'll probably take you a lot of getting used to. So if you plan on buying a fifteen dollar bottle of wine for a special occasion, buy this instead... and when she (or he) spits it out, you can drink it all to yourself.