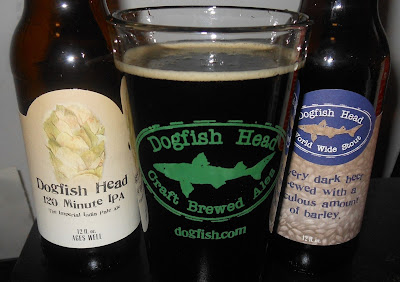 WHAT'S GOIN' ON: What is it about extreme craft beers that attract and intrigue drinkers from around the globe? A rather valid question I would say so myself. The answer, dear reader, is the booze! Deny it as you may, forlorn objects of destitute bewilderment, but know it to be true as my words speak in an absolute resolution when I say that yes!, sweet succulent and inviting booze warmth is indeed a spectacular and wondrous event to behold. True as it may be that hidden, layered and sometimes even delectable textures  - flavors even - come about within a drink of higher altitude, be not fooled preposterous mortal, for it is booze which is the code of law. The very law and blessedly horrid nature in which dictates the ceremony's presented craftsmanship: Getting shitfaced. 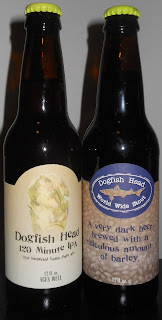 HOW IT WENT DOWN: I pop the yellow warning caps off of both bottles. I slowly bring the just released 2012 bottle of 120 up to my nose. It smells amazing. I grab the 2009 bottle of WWS, and do the same. Is smells scary. I think I'm in lust. Let the games begin, I say to myself, as I type this very sentence.

The mix of these combined monstrosities forms into a super dark cinnamon that's not exactly jet black and features a glowing reddish brown head. The head is minimal and leaves a thin layer of foam around the edges. Grain is evident throughout the newly evolved brew.

I lean in and notice that it smells like a forest full of ripe prunes, plums and berries. Some coffee comes through, but it's way off in the distance, underneath that pool of devilish booze. I close my eyes and smell this for another three minutes, slowly drifting into another plane of consciousness.

I take my first gulp, and realize that this is indeed, some righteous shit. The depth, the flavor... is just, legendary. It's sweet, has a fiery haze of boozy dark fruit notes that hit right away and bounce and explode all over the place, then after the swallow a gentle sweet cut-grass and mocha coffee come flowing through. A minor burning sensation strangles from the inside of the throat in each swallow. This is most indubitably, a syrup of ecstasy. A heavy smokiness from the WWS engulfs the senses, as do incredible candied hop notes from the 120, and it just a masterful blend of liquid death.

And on top of it all, my misanthropic minions, this mixing of two elixirs is incredibly smooth! The mouth feel is silky, velvety, syrupy and yet, it feels as if it becomes whipped cream disintegrating during the swallow. This beautiful potion is indeed... a drink of wonders.

I've had both on the same night, but not in the same glass. While I don't like hoppy stouts, I think you nailed 120 whith your description of "candied hops". Your review has made me a believer and next time I procure a bottle of 120, I shall give this a whirl.

Did you try pouring them like a black and tan, or just pour them into the same glass?

I tried for the black and tan look, but the WWS just swam through the 120 and totally corrupted it. I also tried with the Celebration/1050, with the same result. It would have been real cool if it worked, since that Pumking/WWS mix looked awesome.