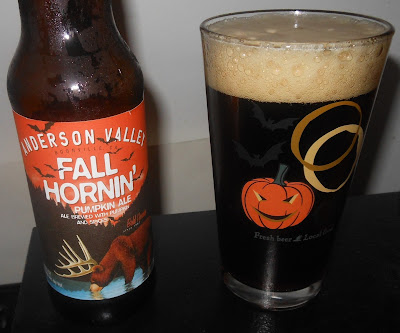 Thoughts: Fall Hornin' comes presented with artwork very standard to all the Anderson Valley releases, but this time it's got an orange sky with some bats flying above their mascot.

My first thought on the color was wow that's a dark one. I was expecting a light orange hue but this brew poured a really dark brown color, almost soda like, with a deep burgundy showing through when held to the light. The head is a light tan / kahki color and fizzled away real quick like. Carbonation is low and while dark, the beer is really clear.

The scent up front is thick malts. Standard pureed pumpkin with some denser than normal spices. Doesn't smell all too much like pumpkin pie, but for a spiced pumpkin ale, it's got a lot more "oomph" than the usual fare.

Spices come out hard and heavy in the first gulp. Loads of cinnamon and nutmeg. Spices are tickling and the beer is sweet and malty. After swallowing, the spices linger for a long while and the beer base falls back and calms to a really mellow state. Cinnamon pretty much steals the show here. It's got a nice pumpkin brew flavor to it and it's not bland at all which is nice. It's also not overly bitter or heavy on the cloves. Though the clove is there, sweetness is the main event with this one. You've got little hints of smokiness, a lot of drying cinnamon, pumpkin puree and sweet, sugary malts here. Not bad.

This one is enjoyable, but not all that awesome since it falls basically in the "more of the same" category. I recently tried their Summer Solstice cream ale (no review) and it was fantastic! It would have been cool if they did a pumpkin cream ale similar to that one to make this beer stand out a little more. In fact, they definitely should have done that.

Email ThisBlogThis!Share to TwitterShare to FacebookShare to Pinterest
What the... First Batch, Pumpkin Beer

I tried this one for the first time over the weekend and felt the same way about it. More of the same old pumpkin ale that everyone else is brewing. Also more of the same malt heavy brews that Anderson Valley is known for. Don't get me wrong, it's a decent beer and I like Anderson Valley, but a pumpkin cream ale would have been pretty slick.