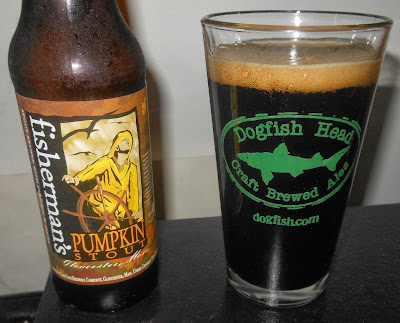 About: "Fisherman’s Pumpkin Stout is a dark stout accentuated by flavors of the Autumn season. Using real pumpkin, cinnamon, nutmeg and allspice, the Cape Ann Brewing Company took a fresh take at the common fall seasonal. This rich dark stout offers an inviting pumpkin spice aroma that gives way to the delicate essence of real pumpkin."

First whiff, and yup, that's sea water alright! Not too heavy on the coffee in this one, but rather some mild chocolate just offshore. It's got a hint of a dark plum like fruit way in the background. Spices are hard to identify, as is that pumpkin as they're so incredibly mild, but I'm pretty sure it's there.

Well, the taste on this one just isn't my cup of booze. It's really watery tasting. Whatever yeast and water they used to make this, that's the first strong flavor I got.... and it's not all that splendid, let me tell you. The malt base is just unfathomably weak on this one. You see what I did there? It's not roasty or interesting at all; it's just kind of there. Really bland, no real flavors going on, and the spices are so dull that even though they're here they may as well be swabbing the deck. Also, it's a bit tart and funky tasting. I'm not digging this one at all.

The main problem with this beer is that it doesn't feel like a stout, both in taste and in mouthfeel. The color of this beer doesn't fool me, man. This one is far too thin. Sure it may put Shipyard's Pumkinhead to shame, but what beer doesn't? While that one's been lost at sea, this beer just isn't in the same... league, as the others. *dr. evil pinky* I had already reviewed their Imperial Pumpkin Stout in 2011 and had it again just this last month, and that beer too fell flat. An amped up boozier version of this brew, it carries all the same weaknesses over to a higher ABV.

Email ThisBlogThis!Share to TwitterShare to FacebookShare to Pinterest
What the... Fishermans, Pumpkin Beer, Stout