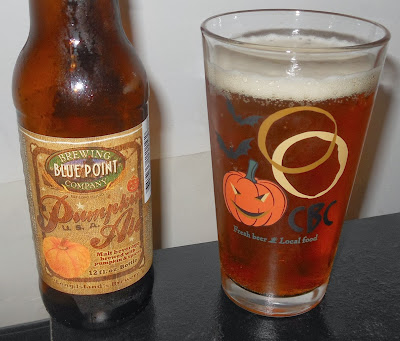 About: "According to Linus there are 3 things never to discuss with people: religion, politics, and the Great Pumpkin. Our Pumpkin Ale, on the other hand, has made quite a buzz from New Hampshire down to Florida. Every season has its pleasures. Harvest your own with our Pumpkin Ale and reap all that Autumn has to offer. Brewed with pumpkins from only the most sincere patches, this seasonal brew is golden orange, crisp and delicious, with an innocent hint of cinnamon and nutmeg that articulates our favorite season. Gather with friends and family and enjoy the change of seasons while savoring a pint of Pumpkin Ale. Just like the leaves, it’s gone after Thanksgiving."

Woah! That's a dirty one. I just got blasted with that "malt beverage" part. This shit should probably be sold in 40oz bottles, because I do believe that this is the first Pumpkin Malt Liquor that I've ever had. I wonder why the ABV isn't on this bottle... did they just mix cinnamon and nutmeg into some Olde English? This stuff is pretty harsh. I'm in the mood for harsh right now but I just belched and this beer is conjuring the old days, the down and dirty days, drinking nasty shit like Mickey's grenades and Colt 45. The spices, whatever they are, do nothing but intensify this grungy, harsh and bitter beverage.

Mouth feel is a big fat striking UGH! to the senses. I don't even know how it feels. My mouth just gives way to a shiver down my spine and a numbness in my face.

This one's not good. And not in the way that Pumpkinhead's not good either. That stuff's at least drinkable. Blue Point wasn't on point when they made this stuff man. This might in fact, be one of the worst beers I ever drank. Better go wash my mouth out with some Natural Ice.

Email ThisBlogThis!Share to TwitterShare to FacebookShare to Pinterest
What the... Malt Liquor, Pumpkin Beer

Wow! I don't think I've had Bluepoint's Pumpkin Ale in a couple of years, but it definitely wasn't bad. I'm surprised, because their beers are usually pretty decent.

I remember several years back having a bottle of Pumking that was just fucking awful. So bad in fact, that I dumped it. I didn't try it again that year, so no idea if it was a bad bottle or a bad batch. Shit happens I guess.

The possibility of a "bad batch" hasn't been ruled out. I've only tried one other beer from Blue Point and that was a 4-pack of 16 oz cans of their Toxic Sludge Black IPA. That beer was pretty good, though didn't blow me away (it's a Black IPA after all), but damn that artwork was some of the coolest I've ever seen on a can of beer!