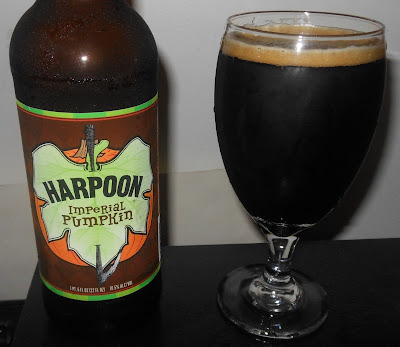 About: "Last fall our brewers were improvising a new beer in our 10-barrel kettle. We had some fresh pumpkin puree leftover from a recent brew of our UFO Pumpkin, so the brewers threw that in the kettle with a bit of molasses, cinnamon, nutmeg, and some roasted malts. It turned out to be delicious, so we thought we’d share it with everyone. - Half imperial stout, half pumpkin ale, with aromas of dried fruit, chocolate, and freshly baked pumpkin pie, this black full-bodied stout is ready to be enjoyed now or saved for a chilly fall evening."

Thoughts: Not really sure why they'd cover the picture of the pumpkin with a big ass leaf like that. Ah, this is a Stout. I guess you gotta read the fine print. This generically named brew poured a straight up dense black with quite a thin dark chocolaty tan head on top.

One of the things I was afraid of when I finally took the time to look at this bottle and noticed that it's a stout, is that the beer isn't really going to smell anything like I hope. Which I hope it smells like Pumking, a standard to hold all other pumpkin beers to. As I lean in and put my nose to the glass I am pleasantly surprised. This smells great. Cinnamon, sugar, nutmeg, allspice and clove - or the usual suspects as I like to call them - are all apparent when you crack the bottle. After pouring the beer into the glass and leaning in, the sensation not only changes, but becomes more interesting. A pouncing of rich, dark fruits jump out and smack ya, followed by a rush of brown sugar and them blackstrap molasses. After a while a little bit of black licorice starts to blend in, followed by the dreaded bubblegum flavored bubblegum. Kinda fruity and weird, but interesting nonetheless. I'm going to gulp it now in hopes the original scent comes back and that bubblegum fades out.

This is some cool stuff. First gulp went through about five stages, ranging from dark and malty, to really spiced, to fruity and sweet, to slightly bitter like coffee, to dry and hazy like fallen leaves. This fucking thing is all over the damn place. I'm going to sip it for a while and then jot down some more notes...

While all the pumkiny spices flow throughout this brew, they become rather subdued in the taste department. They're definitely "felt", but the scent disappeared soon after pouring the beer, and after drinking for a while it becomes a brown sugary, malty, dark fruit flavored stout. Pumpkin ale and its essence come up heavy in belches, but on the tongue it's a lot of booze and sticky sweetness. It's really roasty, got a bit of toasted oats in there, and a nice spice blend which would be stronger if that sweet and sticky overload with a gentle tart backup wasn't so powerful. The cloves are ever present though laid back at first. Once the brew starts to warm the cloves start popping and that blackstrap molasses and black licorice builds in strength as well. I've got no problem with both of those things. I just wish the 50/50 Stout slash Pumpkin ale was a bit more of a pumpkin ale than a stout.

I think it's pretty funny that Harpoon put this beer out just before Southern Tier released Warlock, which is a similar idea of an ale. I've yet to try Warlock, but I'll be sure to compare it to this. This one is fun, but man is it some intense stuff, and not really in a good way either. It's mouth numbing due to the spice, but since you don't get a lot of the spice in the taste you don't notice it happening all that fast, and that's because the super sweet tartness and alcohol blitz just fucking assaults and distracts the senses.