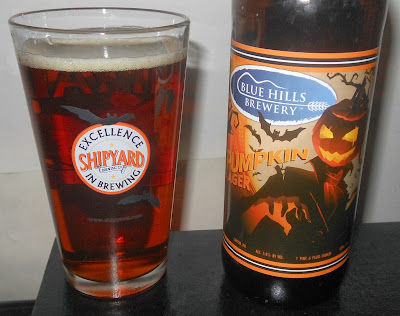 About: "Pumpkin Lager is the perfect treat for the Halloween season. It's loaded with pumpkin spice goodness, and super smooth for a lager."

Thoughts: I had originally thought that this was the same pumpkin lager as their previous release Stingy Jack, only with new artwork due to the "legal woes" the company experienced, and was ready to file it under that review. Only once I got into it though, I realized that this one is very different.

First off, way fucking cooler label on the bottle this time. I don't know what was up with that leprechaun last time, and on top of that they had the whole lawsuit threat over the name, when in fact they should have just gone generic and done this Evil looking pumpkin motherfucker.

Smells a little buttery. I'm getting a ton of buttered popcorn here... that starts to transform into cheap caramel popped corn with nuts after a while. Smells kinda like cracker jacks. But I wonder where the prize is?!

I don't remember it tasting like this before. Not at all. This shit is pretty nasty. It's way fucking worse than before, and if that's possible then yes anything is possible. This tastes like I'm drinking half a cup of I can't believe it's not butter with some Sheetrock chaser. This is probably one of the worst fucking beers I've ever drank. And yet, it's still better than Shipyard's Pumpkinhead. WTF is up with that? That's a bit harsh, well, let's just say that it's more "flavorful" of a beer. ;) Don't ask me. Everyone always talks about Shipyard's beers having a buttery taste but I never really got it. THIS SHIT on the other hand tastes like straight up fucking melted butter over some nasty ass cheesecake. It's fucking disgusting. E-Gah!

It smells like vegetable oil after drinking it for a while too. Totally gross. It's slightly sour and acidic and just bullshit. I ended up chugging this to get it out of the way so no mouth feel or any other descriptions other than my final words of don't buy this.