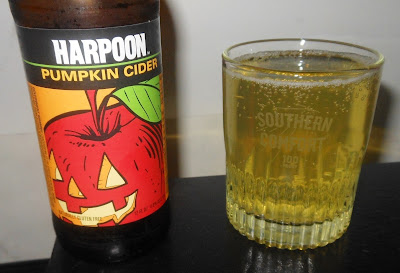 About: "Apples and pumpkins are two of the best things about fall in New England. It was only a matter of time before we decided to bring them together. We combined fresh apples and pumpkins, along with some subtle spices, to make this cider. We left out preservatives, artificial colors, sweeteners and anything else that could get in the way of the flavors we wanted. Locally harvested pumpkins and apples are combined with seasonal spices to craft this pure and natural craft cider. Harpoon Pumpkin Cider is also naturally gluten-free. Its gluten content has been independently measured at less than 20 parts per million, meeting the FDA's proposed threshold for gluten-free."

Thoughts: Love the art on this label. An apple Jack-O-Lantern, man that's cool stuff. Heard a loud fizzy hiss when I popped the cap. Boringly named Pumpkin Cider poured an extremely light yellow color that so light it may as well be clear. Kinda looks like pee.

This shit smells like watery melted down gummy bears. I'm getting no pumpkin spices at all. It doesn't really smell "bad", but it's not strong and really not what I expected. It kinda just smells like a really, really light, sweet cider.

Onto the taste... first gulp, aaaaaaaannnnnnnnnddd, nothin'. Wow, this really doesn't taste like anything. It's super-duper watery tasting, kid. You know how ciders have that pungent kind of sting to them? Not this one. This is like slightly sweetened water. What the fuck, did they use one apple a barrel for this? If I really try to taste something while reading the ingredients on the bottle, I maybe get some nutmeg, way far off in the distance. Hardly any apple, barely any pumpkin, and the cinnamon and cloves are nowhere to be found.

This is some weak ass shit let me tell you. It actually tastes like three whole gummy bears were melted and mixed in with the glass with water. It's kinda sweet tasting overall, but man, it's just a total failure of a product.

I have only had one other "pumpkin cider" before this and that's the Woodchuck Pumpkin release. While that one let me down as well (it needed moar), their cider was fucking gloriously amazing compared to this shit! Sure it's not all too pumpkin pie-like but at least you can tell it's an adult beverage. This stuff was water.