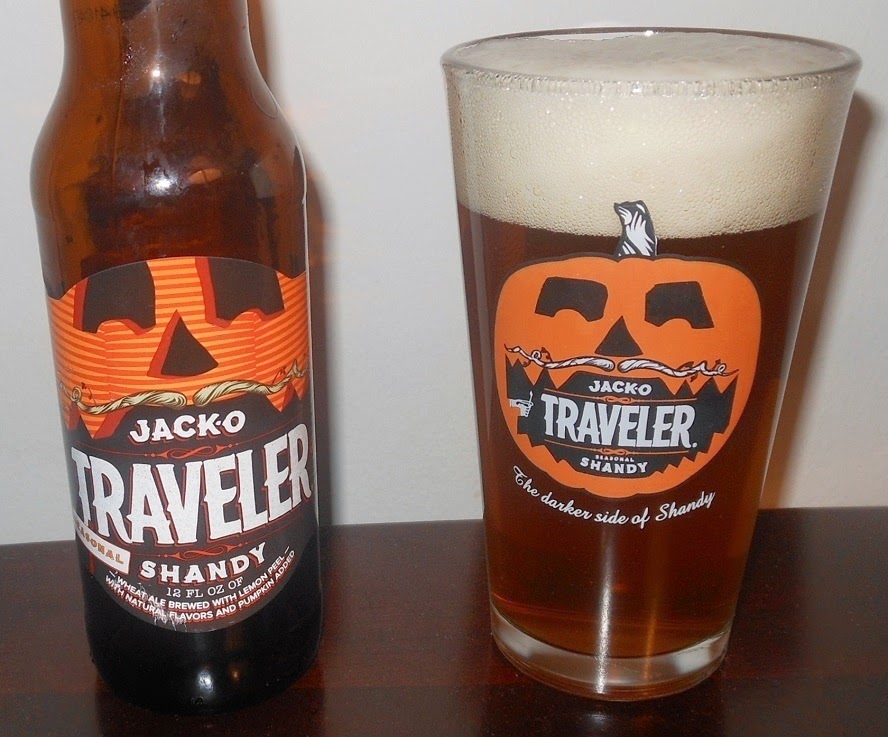 About: "Driven by an obsessive love of high jinks, the Jack-O-Traveler spent his days cooking up mischief for everyone who crossed his path. One of his favorite pranks involved tricking unsuspecting bar patrons into buying him beers and then skipping out just when it was his turn to buy a round. Representing the darker side of Shandy, Jack-O-Traveler is an alluring beer illuminated by the tastes of fall. He strikes the perfect balance between bright refreshment and seasonal spice. Jack is brewed with fresh pumpkin, for a delicious, dark hued, Shandy-inspired beer."

Thoughts: I was actually really surprised to see this suddenly on the shelves. It came rather unexpected. This company had just released three different versions of their Shandy beers and it happened real quick, so I didn't think they'd take on Pumpkin so soon. Jack-O poured a real cloudy amber orange with a slightly grayish head on top. There's not really any carbonation to be seen and it's not the prettiest of beers, despite being a la-de-da Shandy.

This beer smells pretty awesome though. Heavy, massive amounts of cinnamon with a sweet malty undertone to it. Smells a bit like pumpkin pie, and I like that. Can't really get any of the lemon peel in the scent though.

It's really good. There's no bitterness to this at all, but I'm not letting that bother me. This stuff is sweet all the way through, but it's not intensely sweet, nor is it mild. It's damn near perfect. By far the best shandy I've ever had. It's malty for the most part, and the mixing of 2-row barley and wheat is such a great combination to mix with this cinnamon and pumpkin. I'm glad they didn't use pale malt with the wheat because I think it would have really suffered from being too light if that were the case. Here it's pretty indulgent and hits in heavy waves at first before pulling back and riding out with that wheat. It's cool stuff. The hops are pretty mild and are definitely overshadowed by the spices here, but this tastes more like a real beer than a shandy actually. You can still tell it's a shandy obviously, especially a few seconds after swallowing each gulp when that sweetness really hits and the lemon peel comes into play. But that just adds another dimension to this drink. It tastes like a really good store brand pumpkin pie, and that's more than I can say about some of the other pumpkin brews that totally suck.

The mouth feel is pretty thick and a little bit sticky. It's not too drying so perhaps they didn't just dump a bunch of cinnamon powder into this, but instead used "natural flavoring". Whatever they did, it feels right, smells right and tastes right. Honestly, I'm really surprised. Don't ask me why but I thought for sure this beer was going to suck. But man this is one terrific tasting brew! Cool label too.

Will have to keep an eye out for this. Thanks man!

I haven't tried any brew from the Traveler, but I'll pick up a bottle of Jack-O Shandy based on your review. Not only does it sound good, but it's different from the run of the mill pumpkin ale. Thanks for posting about it, because I would have just passed it up.

I haven't tried any of their other beers either. The hipster packaging really turned me off! ;)

The hipster packaging is a serious turn off. I looked for it last night, but there was none to be found. I went with a couple of bottles of Anchor Bigleaf Maple, amongst others. Now that is some righteous Fall ale, my friend.

I've recently heard of that one as well. I'm sure I'll grab a bottle once I come across it.